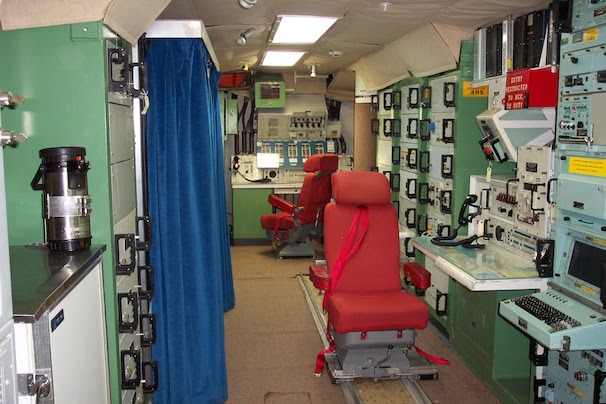 AP - This file photo provided by the National Park Service shows the inside of the deactivated Delta Nine Launch Facility near Wall, S.D., that is now open to the public. The Air Force stripped an unprecedented 17 officers of their authority to control — and if necessary launch — nuclear missiles after a string of unpublicized and unacceptable failings, including a potential compromise of missile launch codes.

WASHINGTON — Defense Secretary Chuck Hagel demanded more information Wednesday after the Air Force removed 17 launch officers from duty at a nuclear missile base in North Dakota over what a commander called “rot” in the force. The Air Force struggled to explain, acknowledging concern about an “attitude problem” but telling Congress the weapons were secure.
Hagel reacted strongly after The Associated Press reported the unprecedented sidelining of the officers at Minot Air Force Base, N.D., where one of their commanders complained of “such rot” that even the willful violation of safety rules — including a possible compromise of launch codes — was tolerated.


The AP quoted from an internal email written by Lt. Col. Jay Folds, deputy commander of the 91st Operations Group, which is responsible for all Minuteman 3 missile launch crews at Minot. He lamented the remarkably poor reviews they received in a March inspection. Their missile launch skills were rated “marginal,” which the Air Force told the AP was the equivalent of a “D’’ grade.
“We are, in fact, in a crisis right now,” Folds wrote in the email to his subordinates.
In response, the Air Force said the problem does not suggest a lack of proper control over the nuclear missiles but rather was a symptom of turmoil in the ranks.
“The idea that we have people not performing to the standard we expect will never be good and we won’t tolerate it,” Gen. Mark Welsh, the service’s top general, said when questioned about the problem at a congressional hearing on budget issues.
Underlying the Minot situation is a sense among some that the Air Force’s nuclear mission is a dying field, as the government considers further reducing the size of the U.S. arsenal.
Welsh noted that because there are a limited number of command positions to which missile launch officers can aspire within the nuclear force, those officers tend to believe they have no future.
“That’s actually not the case, but that’s the view when you’re in the operational force,” Welsh said. “We have to deal with that.”
Hagel himself, before he was defense secretary, signed a plan put forward a year ago by the private group Global Zero to eliminate the Air Force’s intercontinental ballistic missiles and to eventually eliminate all nuclear weapons. At his Senate confirmation hearing he said he supports President Barack Obama’s goal of zero nuclear weapons but only through negotiations.
Hagel’s spokesman, George Little, said the defense secretary was briefed on the Minot situation as reported by the AP on Wednesday and demanded that he be provided more details.
Welsh’s civilian boss, Air Force Secretary Michael Donley, suggested a silver lining to the trouble at Minot. The fact that Minot commanders identified 17 underperformers was evidence that the Air Force has strengthened its monitoring of the nuclear force, he said. And he stressed that launch crew members typically are relatively junior officers — lieutenants and captains — with limited service experience.


Donley noted that he is particularly sensitive to any indication of weakness in the nuclear force because he took over as Air Force secretary in October 2008 after his predecessor, Michael Wynne, was fired by then-Defense Secretary Robert Gates for a series of nuclear embarrassments. Donley was charged with cleaning up the problem.
“You will be a bench warmer for at least 60 days,” Folds told them in his email.
The 17 cases mark the Air Force’s most extensive sidelining ever of launch crew members, according to Lt. Col. Angie Blair, a spokeswoman for Air Force Global Strike Command, which oversees the missile units as well as nuclear-capable bombers. The 91st Missile Wing has 150 officers assigned to launch control duty.
In his congressional testimony, Welsh said Folds and other senior commanders determined that the problematic launch officers had “more of an attitude problem than a proficiency problem.”
He said he wished Folds had “used different language” in his email.
“The word ‘rot’ didn’t excite me, but it got my attention,” Welsh said, adding that he does not believe “rot” is the problem. “I don’t believe we have a nuclear surety risk at Minot Air Force Base,” referring to the danger of an accident or unauthorized launch.
The email obtained by the AP describes a culture of indifference at Minot, with at least one intentional violation of missile safety rules and an apparent unwillingness among some to challenge or report those who violate rules.
In response to AP inquiries, the Air Force said the lapses never put the security of the nuclear force at risk. It said the officers who lost their certification to operate ICBMs are now getting more training with the expectation that they will return to normal duty within about two months. The missiles remain on their normal war footing, officials said.
In addition to the 17, possible disciplinary action is pending against one other officer at Minot who investigators found had intentionally broken a safety rule in an unspecified act that could have compromised the secret codes that enable the launching of missiles that stand on high alert in underground silos in the nation’s midsection. Officials said there was no compromise of missile safety or security.
Advising his troops on April 12 that they had “fallen,” Folds wrote that drastic corrective action was required because “we didn’t wake up” after the March inspection that he said amounted to a failure, even though the unit’s overall performance technically was rated “satisfactory.”
“And now we’re discovering such rot in the crew force that your behavior while on alert is accepting of” weapons safety rule violations, possible code compromises and other failings, “all in the name of not inconveniencing yourselves,” Folds wrote.
Folds also complained about unwarranted questioning of orders from superior officers by launch crews and failure to address superiors with the proper respect.
“It takes real leaders to lead through a crisis and we are, in fact, in a crisis right now,” he wrote.
When the AP inquired about the Folds email, the Air Force arranged a telephone interview with one of Folds’ superiors, Col. Robert Vercher, commander of the 91st Missile Wing.
“We are frustrated anytime we’re performing less than we expect of ourselves,” Vercher said, adding that he and other senior officers are implementing an aggressive and innovative plan to restore a record of high performance.
“There was a problem,” Vercher said. “And we will fix it.”
___
Follow Robert Burns on Twitter at http://www.twitter.com/robertburnsAP