And Here Comes the COVER-UP STORY From the US MILITARY!

Well, well, well...what did I just tell you in my previous post!

Immediately after I posted my previous report, I received the following. Is the US military laying out the groundwork for a plausible "official government explanation" to cover for the PLANNED nuclear detonations in this nation, as outlined by the Navy SEAL source recently???

Is the following article to be used as COVER-UP for a deeper, darker plan for this nation?

On the anniversary of the death of Osama bin Laden, the United States Army and the Department of Defense are warning of a terror threat for May 2nd, 2013 according to this breaking story from Infowars.com. A video report warning of terror attacks on bin Laden’s death is also below.

The Department of Defense and the US Army are warning of a possible terror threat to coincide with the second anniversary of the death of Osama Bin Laden, according to a memo sent to Infowars by a source based at Fort Hood.

The antiterrorism awareness advisory asks army personnel to “heighten awareness of force protection actions as the nation approaches the second anniversary of the death of Usama Bin Laden (UBL),” urging soldiers to be cognizant of “terror related threats to army personnel, families and facilities.”

Although the memo acknowledges that there is no specific credible threat for May 2nd, it does warn that terrorists, “may attempt to carry out an attack during or around the timeframe of the second anniversary of the death of Usama Bin Laden to capitalize on the symbolism such an attack would represent.”

You can see the U.S. Army memo yourself below with video report at bottom of story. [Note-Video deleted.] 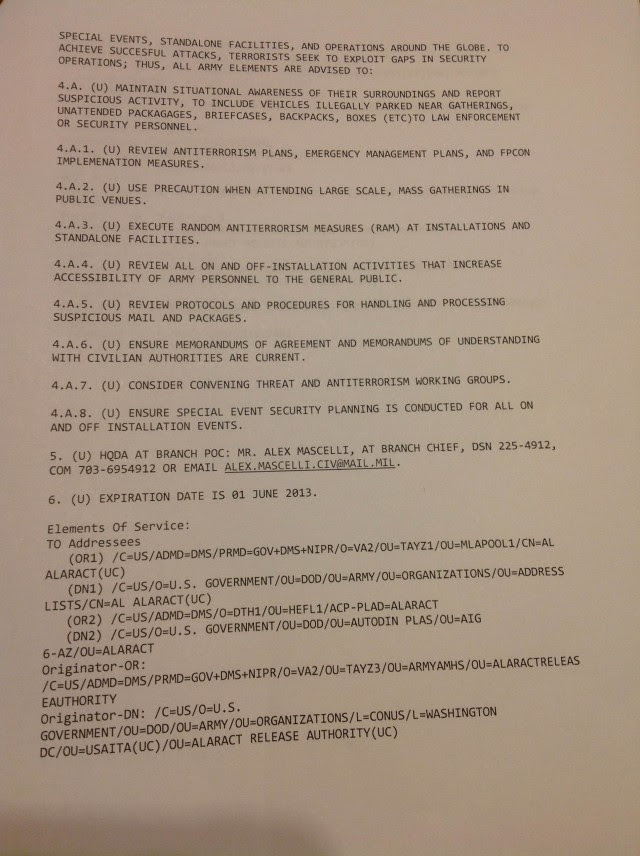