"He Who CREATES the Crime, also CREATES THE PERPETRATORS." 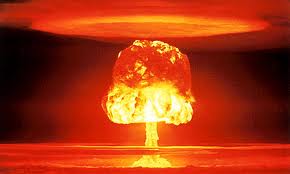 If and when such deadly nuclear and missile attacks occur as I have previously reported on, based upon revelations of a Navy SEAL, please be advised:

The US government and military and complicit news media elements will falsely blame their chosen scapegoat for the these attacks, to cover up for their covert actions!

This has always been their method of operation with every other false flag/black op they have previously carried out in our nation.

With "9/11", Iraqis were falsely blamed, in order to justify  America's hidden military expansionist agendas in the Middle East (and many other agendas as well.)

With the OKC bombing, they falsely blamed actor Timothy McVeigh and his laughable  nitrogen fertilizer bomb truck, to then accuse the American Patriots and militias, so hated by the NWO people.

When these deadly nuke explosions finally take place in various locations across America, WHO WILL THEY FALSELY BLAME for their hidden agendas THIS time around???

Just remember that when it finally occurs, DISREGARD the "official government/military explanation!"

Ignore the lying and complicit, cover-up news media lapdogs of the NWO.

Look BEYOND the lies and cover-up, and get angry, America...get very angry!

It is far past time to identify and expose the REAL TERRORISTS in America perpetrating these false-flags, and take legal measures to stop them once and for all. For the greater good of mankind and the well-being of the endangered citizens of our nation.


You have been clearly warned ahead of time.