A DISTURBING PREVIEW OF FUTURE 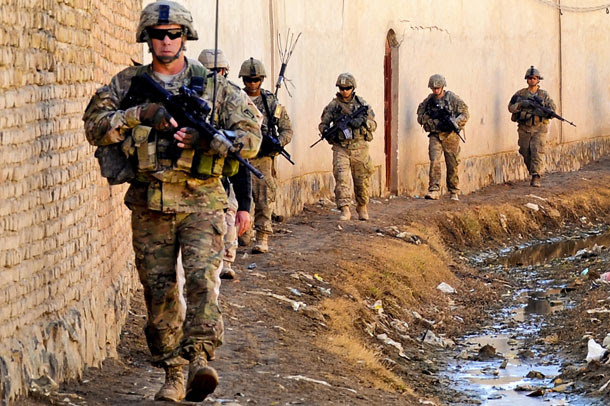 Long Island Press – by Jed Morey
U.S. Military ‘Power Grab’ Goes Into Effect
The manhunt for the Boston Marathon bombing suspects offered the nation a window into the stunning military-style capabilities of our local law enforcement agencies.
For the past 30 years, police departments throughout the United States have benefited from the government’s largess in the form of military weaponry and training, incentives offered in the ongoing “War on Drugs.” For the average citizen watching events such as the intense pursuit of the Tsarnaev brothers on television, it would be difficult to discern between fully outfitted police SWAT teams and the military.
The lines blurred even further Monday as a new dynamic was introduced to the militarization of domestic law enforcement. By making a few subtle changes to a regulation in the U.S. Code titled“Defense Support of Civilian Law Enforcement Agencies” the military has quietly granted itself the ability to police the streets without obtaining prior local or state consent, upending a precedent that has been in place for more than two centuries.
The most objectionable aspect of the regulatory change is the inclusion of vague language that permits military intervention in the event of “civil disturbances.” According to the rule:

Federal military commanders have the authority, in extraordinary emergency circumstances where prior authorization by the President is impossible and duly constituted local authorities are unable to control the situation, to engage temporarily in activities that are necessary to quell large-scale, unexpected civil disturbances.

Bruce Afran, a civil liberties attorney and constitutional law professor at Rutgers University, calls the rule, “a wanton power grab by the military,” and says, “It’s quite shocking actually because it violates the long-standing presumption that the military is under civilian control.”
A defense official who declined to be named takes a different view of the rule, claiming, “The authorization has been around over 100 years; it’s not a new authority. It’s been there but it hasn’t been exercised. This is a carryover of domestic policy.”
Moreover, he insists the Pentagon doesn’t “want to get involved in civilian law enforcement. It’s one of those red lines that the military hasn’t signed up for.” Nevertheless, he says, “every person in the military swears an oath of allegiance to the Constitution of the United States to defend that Constitution against all enemies foreign and domestic.”
One of the more disturbing aspects of the new procedures that govern military command on the ground in the event of a civil disturbance relates to authority. Not only does it fail to define what circumstances would be so severe that the president’s authorization is “impossible,” it grants full presidential authority to “Federal military commanders.”
According to the defense official, a commander is defined as follows: “Somebody who’s in the position of command, has the title commander. And most of the time they are centrally selected by a board, they’ve gone through additional schooling to exercise command authority.”
As it is written, this “commander” has the same power to authorize military force as the president in the event the president is somehow unable to access a telephone. (The rule doesn’t address the statutory chain of authority that already exists in the event a sitting president is unavailable.)
In doing so, this commander must exercise judgment in determining what constitutes, “wanton destruction of property,” “adequate protection for Federal property,” “domestic violence,” or “conspiracy that hinders the execution of State or Federal law,” as these are the circumstances that might be considered an “emergency.”
Article continued-
http://www.fromthetrenchesworldreport.com/pentagon-unilaterally-grants-itself-authority-over-civil-disturbances/44166
Posted by Pamela Rae Schuffert at 9:22 AM