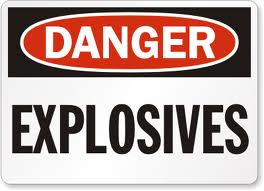 SPECIAL THANKS TO MORT OF

WWW.BEFOREITSNEWS.COM
Note from Pamela:
My deepest suspicions is that this may become a staged false flag operation, and that the gov/military themselves removed these explosives deliberately. And now they have planted articles in the media designed to lead people to THEIR conclusions.

MOTIVE- This may be a false flag being set up designed to falsely implicate the many NWO resisters and covert militias scattered throughout this state, preparing to fight back under marital law.The US government and military HATE the NWO resistance embedded in Montana...some of the bravest and most committed Patriotic Americans in this nation and ready to DIE FOR FREEDOM.

SCENARIO-The gov/military can place and detonate these explosives and have their modern-day "Timothy McVeigh" false militia stage actors prepared to be falsely blamed for this, leading to a DHS/FEMA witch hunt and round-up against the Patriot/militia NWO resisters
highly prevalent throughout the state of Montana.

Let's all face it: they cannot wait to be able to label
THE AMERICAN PATRIOT
as
"...THE TERRORISTS."

The federal Bureau of Alcohol, Tobacco, Firearms and Explosives, the U.S. Forest Service, and the Carbon County Sheriff’s Office are asking for help from the public in gathering information about the theft of approximately 559 pounds of high explosives from a USFS explosives bunker located near Red Lodge.
A press release from the ATF says that in April 2013, someone used forced entry to get into an explosives storage facility owned and operated by the U. S. Forest Service, which is located about two miles south of Red Lodge.
Officials say that various emulsion-type explosives, explosive cast boosters and detonating cord were taken from the facility.
Like I said before, sure is alot of explosions occuring lately so this is a red flag. Let’s hope they aren’t used for anything seriously damaging.  -Mort
Posted by Pamela Rae Schuffert at 9:35 AM