More on Nazi Germany and THE GUILLOTINES

GUILLOTINES AND THE NWO FASCIST AGENDA 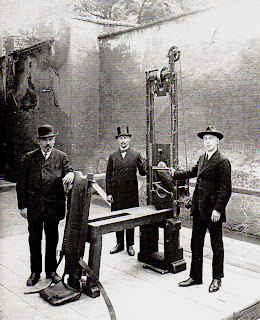 Above and below are photographs of the very guillotine used to execute Sophie Scholl, brave resister of the German Nazi Fascists of WWII. Johann Reichhart, the actual executioner of Scholl, is pictured above. It is estimated that Reichhart executed up to 3,000 condemned prisoners, most of them resisters of  the Nazi regime. 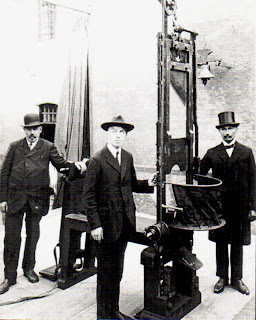 It is said that guillotine executions in Hitler's Nazi Germany were reserved for primarily opponents of the Nazi regime. 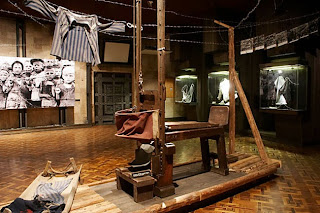 Although the guillotine used to execute Sophie Scholl was destroyed after WWII, an identical guillotine from the prison of Wurzburg was captured by the Soviets, and later placed in their War Museum in Kiev. (Above)

It will be interesting to finally see which NWO faction in America claims the GUILLOTINES as their own under martial law.

Will it be the NWO leftists and their Zionist genocidal  "Noahide Laws" being enforced that will bring out the guillotines?

Will it be the NWO Fascists (think CIA NWO fascists in "AMERIKA")out to terminate resisters as Hitler did previously ?

Or will it be THE MUSLIMS in bed with Obama, who can't wait to behead more Christians in America, just like they have done throughout the rest of the world?

Frankly, I think they are all working cozily together for the realization of the NWO agenda in America. Obviously united in their common goal of TERMINATING THE CHRISTIANS and all OTHER NWO resisters nationwide and worldwide.

Ultimately, it's the ILLUMINATI'S NWO and THEIR guillotines to terminate resistance to their evil agenda.

Friends, you will never be able to understand the future we face in America and the world today, UNLESS you understand THE PAST. Because, yes...history does repeat itself. Again, and again, and again.

And this time on American soil.