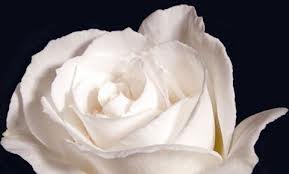 My fellow Americans and my fellow Christians, we MUST choose wisely to LEARN FROM HISTORY. Because in order to understand the FUTURE, we must FIRST understand THE PAST.

I have stated clearly that THE GUILLOTINES ARE HERE. The large presence of millions of modern guillotines demands AN ANSWER. WHOSE are they? And for WHOM are they? And WHY?

There are several factions operating in America today who are supporting the NWO agenda.  I have previously described the Jewish Zionist/leftist role in the NWO/guillotines agenda, with their NOAHIDE LAWS. Jewish Communist/globalist/Zionist supporters are working intensely for the goal of overthrowing the Constitutional Republic and Christian liberty in America.

But we must also understand that the Nazi Fascists also used the guillotines to behead resistance as well. Today in America,the Fascists in America are working hard as well for their NWO agenda to be fulfilled. The CIA and their "OPERATION PAPERCLIP" and many other NWO related operations is one of the those more visible proofs.

Does America also have her version of the "White Rose" resistance, and her heroes to counter the NWO darkness that threatens our very existence now?

America MUST...because we certainly have our modern version of THE NWO NAZI FASCISTS to oppose here in "AMERIKA" today. 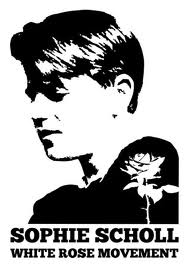 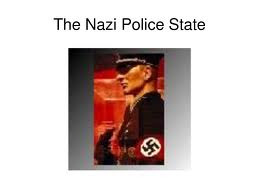 Nazi Germany was a police state. Whether it was true or not, people believed that informants were everywhere. To keep secrecy, membership of the White Rose movement was extremely small. It produced anti-war leaflets that were also deemed to be anti-Nazi.

What those in it did was extremely dangerous. If they were captured they would have been charged with treason with the inevitable consequences. That is why the group had to be kept very small – everyone knew each other and each was convinced of the loyalty of everyone in the group.

The White Rose movement was active between June 1942 and February 1943. In that time they made six anti-war/anti-Nazi leaflets, which were distributed in public. Member also engaged in a graffiti campaign within Munich. 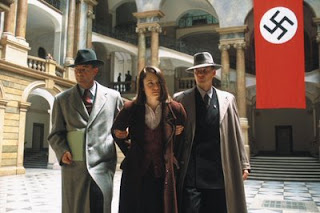 However, Sophie and Hans realized that they had not distributed all of them. As so much trouble was taken to produce these leaflets, they decided that they would ensure that the rest were also distributed.

They were seen throwing the leaflets around the university’s atrium by a caretaker called Jakob Schmid and he contacted the Gestapo. This occurred on February 18th 1943. The Scholl’s were literally carrying all the evidence needed by the Gestapo. 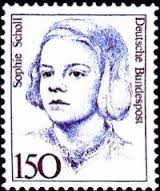 Both Hans and Sophie admitted their full responsibility in an attempt to end any form of interrogation that might result in them revealing other members of the movement. However, the Gestapo refused to believe that only two people were involved and after further interrogation, they gained the names of all those involved who were subsequently arrested.

Sophie, Hans and Christoph Probst were the first to be brought before the People’s Court on February 22nd 1943. The People’s Court had been established on April 24th 1934 to try cases that were deemed to be political offences against the Nazi state.

Invariably these trials were nothing more than show trials designed to humiliate those brought before it, presumably in the hope that such a public humiliation would put off anyone else whom might be thinking in the same way as the condemned. 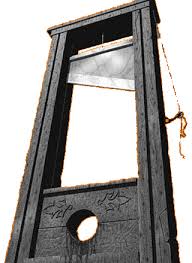 All three were found guilty and sentenced to death by beheading. The executions took place the same day. 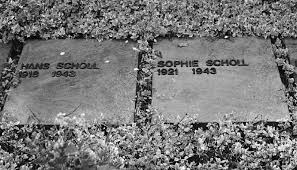 Sophie's final words while being led away to execution:

"How can we expect righteousness to prevail, when there is hardly anyone willing to give himself up individually to a righteous cause?

Such a fine, sunny day, and I have to go.

But what does my death matter, if through us,
thousands of people are awakened and stirred to action?"

And let EVERY AMERICAN learn from the past.