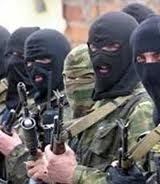 SPECIAL THANKS TO DAVE HODGES
AND
"THE DAILY SHEEPLE"

With the present Ukrainian crisis, the Russians are looking like a foe that could pose a real military threat to the United States. The forces of war are lining up in Ukraine. However, there is not much that is spontaneous about this event. Both sides are playing out a prepared script written by the banksters.

The Russian Threat
Some people mistakenly believe that Putin is going to single handedly defeat the bankers and save America from the New World Order. Nothing could be further from the truth. Putin, Obama, Ukrainian government, Crimea and NATO are right on cue as each party plays out its script in preplanned scenario.

Ask yourself a question. Why would the Russians be posturing to fight the  US over first Syria, and then Ukraine, while at the same time be building up their troops on US soil? Didn’t Secretary of Defense Hagel announce on March 5th that the US was breaking off military cooperation with the Russians over the events in Ukraine?

Then why would Hagel, on behalf of Obama, announce that we were reducing our military to pre-1940 levels in the midst of a crisis which could turn into World War III? Are we looking at gross incompetency, or are we looking at abject treason by deliberately compromising the military strength of the US?

The following paragraphs make it clear that we are looking at treason emanating from the Obama administration. And to those of you who admire the new “Christian” on the block, President Putin, you may get to know him very well in the near future.

The Order of Events That Will Follow
The answer to this question of what is coming is quite simple. World War III will be preceded by a series of false flag events which will be followed by the brutal implementation of martial law. The martial law will be enforced by foreign troops, the Russians and the Chinese. Below is a brief synopsis of the proof that I have previously offered, complete with references in previous articles.

Martial Law/Concentration Camp Document
The most telling set of events which indicate that Americans will soon be under martial law consist of the NDAA and Executive Order 13603 which does away with all due process and literally provides for the enslavement of American citizens. If this legislation is new to you, Google these documents and be prepared to be shocked. However, these aforementioned documents are not the most damning.

A short time ago, the awake people in this country were shocked with the revelation of new martial law documentation,  FM 3-39.40 Internment and Resettlement Operations (PDF). which detailed that massive creation of FEMA camps which would soon house untold millions of American citizens
What lies below is more proof that it is will be foreign troops killing American citizens in these camps, not American soldiers who cannot be counted on to violate their oath to the Constitution.

Training U.S. Trainers
N-43. Soldiers and Marines who are assigned training missions receive a course of preparation to deal with the specific requirements of developing the target HN confinement officers (i.e. foreign detention officers). The course should emphasize the cultural background of the HN, introduce its language (to include specific confinement-related terms and phrases) and provide insights into cultural tips for developing a good rapport with HN personnel.

The following paragraph makes is abundantly clear what role the Russians will play in the new detention camps. They are going to be in complete control of these camps.


Training Methods
N-48. Training programs are designed to prepare HN personnel to eventually train themselves. Indigenous trainers are the best trainers and should be used to the maximum extent possible.

The day that the detainees hear the engines start up and the American military vacates the concentration camps, that will be the day that all American detainees better “get right with God”.
Can it be anymore clear, or is this administration simply kidding around?

They would be none other than members of the American military who are not going along with the plan. This also explains why Obama has felt compelled to fire 260+ senior military command officers because he cannot get the bulk of our military leadership to turn on the American people.

The F-22 coastal surveillance flights over the Alaska/Russian border, were suspended by this administration because of “oxygen uptake” problems for the pilots which was causing them to blackout. That may, or may not be true, however, what is true is that nothing replaced these surveillance flights. The F-16′s could have easily performed the same task. This increased the opening of the backdoor to Alaska  for a Russian military incursion should the present crisis in Ukraine turn violent.

People such as Amanda Mitchell repeatedly sent me accounts of Russian soldiers in Ketchikan, AK. I also received over two dozen emails from Juneau and some reports from the northern regions of the state in which Russians were training with their heavy equipment.

I have received repeated email communications from a former law enforcement official who does business on a local base in which he delivers product, near Victorville, CA., in which he has repeatedly witnessed Russians training with their own tanks on American base.

As I indicated in earlier paragraphs, there are Russians on the base at Fort Carson, Colorado and they have been repeatedly photographed.

I have also detailed how Obama gave Putin seven oil rich Islands that formerly belonged to Alaska. Some of these same Islands are ideal locations from which to launch an invasion of Alaska. I believe that this is precisely what will happen if NATO military opposes Putin in Ukraine.

Don’t forget about the good work of Sherrie Wilcox who has both uncovered hundreds of thousands of FEMA coffins outside of Atlanta as well as photographed Russian soldiers training inside of DHS vehicles in Western Kentucky.

There have also been many of the good people in Gatlinburg, TN., such as Dr. Susan Helman who have detailed the presence of Russian soldiers in their town. The presence and purpose of using the nearby Smokey Mountains  as a staging area for Russian commandos has been confirmed by ex-Green Beret and military intelligence officer, John Moore.

According to Moore, it is likely that these Russian commandos are being trained to take down a city’s infrastructure which could be accomplished with just two six man teams. And we now know that there are literally dozens of Gatlinburg’s across America.

The Voice of Russia

As I got too close to the truth, the Russian media even tried to bring me into their sphere of control on the radio show, the state-sponsored Voice of Russia and tried to discredit me.

Shakespeare once warned us to not believe people who are protesting too loudly. Last fall, after I began receiving some notoriety for reporting on martial law legislation involving the United States (i.e. NDAA, Executive Order 13603, etc.), I was contacted by Russian propagandists at the Voice of Russia in which they wanted to interview me on the topic.

Not coincidentally, I was publicly stating that the Russians were going to be at the vanguard of a martial law contingency which would brutally subjugate the American people against any and all that would resist the takedown of this country and the installation of the New World Order.

The Russians interviewed me on these issues and they proceeded to misrepresent and minimize my professional credentials. And despite the fact that during the interview, I documented all claims with fact-based references, the show synopsis referred to me as an “extremist:” and again misrepresented my professional credentials. By the way, the order to interview me, must have come down from Russian High Command. They contacted me at 10pm, local time, to interview with them at 5 AM the next morning .

The interview was intent on discrediting any intention on the part of this administration to implement martial law. And the Russians were intent on discrediting this notion because they are going to be leading the implementation of martial law. Shakespeare was right about protesting too loudly.
Don’t forget about the microphone incident in which Obama told Medvedev to tell Putin that he will “have much more flexibility after he is re-elected”.

Of course, there is the FEMA Bilateral agreement with the Russian military and FEMA to bring 15,000 Russian soldiers to the US to participate in disaster training. I would indeed call a FEMA camp “disaster training”.

Don’t forget, that we have invited the Russians to participate in the upcoming RIMPAC war games which were designed to prepare to fight against Russian military strategies. And the Russians were allowed to observe our GridEX II drills in which showed them how to take down the power grid. This is unmitigated treason.

We would have to be dumber than a box of rocks to believe that Putin is championing an effort to overthrow the banksters. On one hand, he is preparing to fight banker hijacked government of the United States over Ukraine and on the other hand, his troops are training to enforce martial law in the United States. It does not make sense unless one considers the following chain of planned events:


1. False Flag attack designed to place the American people in vulnerable position.
2. The implementation of martial law designed to eliminate all opposition to the installation of a NWO government with complete autocratic rule. Any opposition to the coming World War III will be eliminated.
3. World War III will commence according to script and will devastate this planet so that the bankers can create a new order out of chaos.

Putin and Obama are playing out a script prepared by the banksters.

All of the above claims are documented in the reference section below.

Contributed by Dave Hodges of The Common Sense Show.
- See more at: http://www.thedailysheeple.com/obama-and-putin-playing-out-world-war-iii-script-written-by-banksters_032014#sthash.RASgXMBR.dpuf
Posted by Pamela Rae Schuffert at 9:01 PM