Here is Where This Present Ministry All Began... 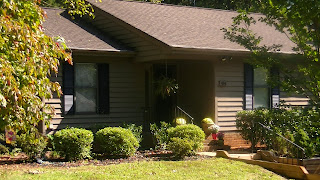 Above is the home that my beloved mother and I lived in for 13 years in the Carolinas, from 1983 to 1996. It was while living here that I experienced the years of intense battles with the satanists of the Carolinas, especially in the Asheville, NC, area.

It was here that I first received the strange report from my friend Marie McCullough about their prayer journey across America and stumbling accidently upon black prisoner boxcars with shackles and modern guillotines in Columbia Falls, Montana, near Glacier National Park. I listened in fascination as she sat in our livingroom here, talking about those strange boxcars.

It was here that I first began receiving reports from my CIA whistleblower friend, Michael Maholy, who had formerly worked directly under Mr. 666 Bush Sr. himself when he was head of the CIA. In this very home I received the words over the phone from Michael stating that "...oh, ALL of us in the CIA know what the concentration camps in America are for...we ALL know that they are to TERMINATE the resisters of the NEW WORLD ORDER as it comes down in America UNDER MARTIAL LAW..."

Actually, it was his words of shocking revelation, coupled with those of other CIA insider contact like my friend Elaine, that fueled my intense passion to investigate the NEW WORLD ORDER agenda for America, and WHAT THEY HAVE PLANNED AGAINST MY FELLOW CHRISTIANS IN THIS NATION.

When my friend Elaine, former assassin under Bush Sr in the CIA, admitted to me that it would be "...brutal rape, torture and death for the Christians once they get their hands on them under martial law..." I remember being devastated as I thought about the Body of Christ in America. It was when I lived in this home, that I visited Elaine in Okeechobee, Florida, to interview her for one month about her former experiences as the satanic high priestess over Indiana for 18 years, and a CIA assassin under Bush Sr. as well.

It was when I lived in this home, that I encountered my friend, super Patriot ED PACK, who was a brilliant man and researcher exposing the NWO. He  warned me about the OKC bombing plot ( an inside job) 3 months before it actually happened, thanks to his contacts, Patriot moles planted deep in the White House, as he admitted to me. He also filmed WACO live as it happened. His film was later turned into a documentary exposing the truth about the WACO tragedy.

And it was while living here that I watched the US government systematically destroy this poor man, finally culminating in microwaving him while in his home in January of 1995. He saw the government van parked in front of his home, he witnessed the microdish mounted on the top of this van as it was aimed towards his living room, and his body then filled with terrible heat and burning. He went to his doctor the next day, coughing up blood. His doctor said, "Ed, what has happened to you? Your body is filled with DEEP INTERNAL BURNS."

I watched this poor man degenerate during the next year and a half, until he was skin and bones and hospitalized with a large tumor that the microwaving spawned rapidly in his body. In the hospital where I visited him in Spartanburg, SC, he spoke to me as he put his hands on my shoulders and looked intensely into my eyes: "Pam, they may have gotten ME, but they haven't gotten YOU yet. TELL them...tell the American people everything about the NEW WORLD ORDER...promise me you will tell them."

With tears in my eyes, I promised him I would never remain silent. And two days later, Ed was dead. I attended his funeral in April of 1996, and looked up into heaven and said, "God, give me the grace to keep this promise I made to Ed." Apparently God has done so, because I am alive to this day many years later, and have not stopped in praying against and reporting on the NWO agenda for America.

And it was while living in this home, that Bush Sr sent one of his CIA assassins and satanists, Larry Burks, into my life to deceive me and lure me into a set-up for my abduction and demise planned for the mountains of NC.

I barely exited from that set-up alive, after realizing it was a trap near Asheville.Thankfully, I had taken a fellow Christian prayer warrior with me on that trip, and I am certain that his presence with me, praying heavily, helped to avert a near and fatal disaster.

My father's former high priest, Jericho, confirmed this to me several years afterward. When I asked him what they had waiting for me, he replied, "Pam, they had a RYDER rental truck filled with chains, knock out drugs and duct tape. They were going to abduct you and haul you to the satanist caverns of the Smokey Mountains, and nail you to a cross to teach you a little lesson for daring to mess with them..."

I found out from one info source following this failed abduction attempt, that Larry indeed was CIA and working for Bush Sr at that time, and a satanist as well. The CIA is always hiring satanists for assassin positions and torture roles as well, even as former CIA employees admitted to me frankly. To put it bluntly, the CIA and satanism are inseparable. The Nazi fascists of OPERATION PAPERCLIP who helped to form the CIA were products of the Bavarian Illuminati in Germany.

Are we commanded by Jesus to forgive and to pray for our enemies? You and I know we are, as Christians. This is why I have published several articles asking readers to pray for the mercy of God to bring George H. W. Bush (Scherf) to great and deep repentance for his sins against God and crimes against humanity, that he might be forgiven and saved. I have forgiven him. And God is able to set him free and save him before he dies.

They prayer of my heart daily is for God to reach down in His mercy and bring to salvation every member of the Bush/Scherf family, and to all other Illuminati bloodline families as well.

The only way to redeem their lives after years of lawlessness and sin and rebellion against Almighty God, is for Jesus Christ to move them to repentance and for God to be glorified in their salvation at last. 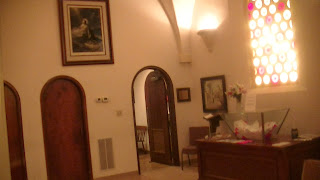 Above and below is the prayer chapel where I first began to pray against everything I began finding out about the NWO and martial law. I would enter into one of the prayer rooms through the brown door (above) and cry out to God about all of the disturbing revelations I had been receiving about martial law and the NWO. 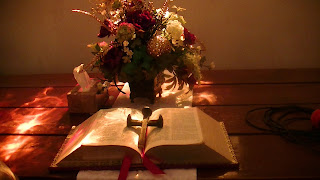 And it was when I was laying on the floor of my bedroom here, while fasting in January of 1996, that the Holy Spirit distinctly told me that He was ready to show me the things to come to this nation at last. And that He was commissioning me to warn His people and wake them up. He told me that He would lead all the right people into my life, to show me what was to come.

And He told me one more thing: that I would someday give my life for this calling IF I chose to receive it.

God does not make robots. He gave each one of us a free will. We can choose to obey God, or not. Because I knew by then that God's people would be among the major targets under martial law, and I loved the Body of Christ so deeply, I could never say no to God about this.

And my answer was YES to God that day.

And the reports you have read of mine throughout the years, are a direct product of that divine encounter that day in January of 1996, right here on these grounds of a Christian retreat.

There is a lady sitting next to me here, who is also aware of many things to come. She has asked me numerous questions about my reporting, listening intently.

I simply smiled and replied the obvious: you cannot perform such investigative journalism as mine, coupled with an uncompromised Christian testimony, and not realize that someday you probably will give your life for Christ.

But I certainly know I am not alone. Every true Christian throughout North American faces persecution and martyrdom from the same NWO people as I do. We as Christians are all in this together.

Below is a picture of the very ministry auditorium in which I encountered a woman from MONTANA, attending a DEREK PRINCE Prophecy Conference being held there in 1996. By then, I already knew about the prisoner boxcars with shackles prepositioned in Montana for martial law. 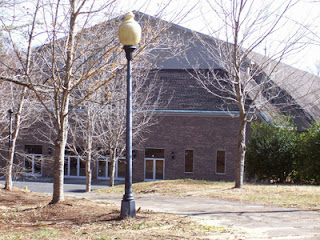 I walked up to her and said, "Ma'am, did you realize that there are already prisoner boxcars with shackles in Montana, to take Christians and other NWO resisters to the detention camps under martial law someday?"

She looked shocked, but then replied, "No...but this explains THE VISIONS THAT GOD HAS BEEN GIVING ME!"

Visions??? What visions, I asked her.

She said, "God has been giving me visions of CHRISTIANS BEING HERDED LIKE CATTLE INTO BOXCARS, to be TAKEN TO CAMPS AND KILLED..."

I told her that she had received a true vision from God of things to come. This was exactly what I had been told would happen under martial law in America.

Yes, God IS speaking to His people, to forewarn them and prepare them. The question is, WHO is willing among His people to receive THE TRUTH??? Our flesh does not like to hear such revelations!

I have been encountering such wonderful Christians at this revival meeting here this weekend. No, I may NOT agree with every point of some of the speakers or even leaders here. We never will. But I am called to love my fellow Christians as Christ loved me, and to receive them. God will sort them out in the day of judgment of all men's hearts, and not me.

In the mean time, I am called to love and to BE LIKE JESUS. Thank God!

Thank you for your ongoing prayers. Though still dealing with pain continually, I am slowly making progress and it is slowly receding. Thank you for your prayers for John my brother. Will write a special article about my visit with him this coming week and all about what I encounter in Asheville, NC, THIS time around...