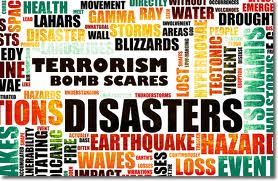 Note from Pamela: While such "prepper" articles are generally good, they usually do not cover harsher coming realities such as chemical/biological attacks, nuclear strikes, etc. I recommend each prepper prepare with complete chem/bio protective gear and training manuals, a complete prefab nuclear fallout shelter, up to ten years emergency food/survival supplies,etc. And remember that whenever nuclear weapons detonate, much electronic equipment is disabled as well in that vicinity.

When planning for a SHTF scenario, there’s really only one thing that we can be sure of; Survival will be a bigger challenge than you ever believed possible. While you can defiantly take measures to prepare yourself for what’s to come, when you’re talking about a SHTF scenario, all bets are really off.

Here are 10 things that you may have never considered when planning for a SHTF survival situation.

During an extreme SHTF scenario, it is very likely that law enforcement and emergency responders will be nonexistent. Even during small scale disasters, law enforcement officers often leave to take care of their own families first. When things go bad (empty grocery stores, no utilities, mass riots, violence, etc.) you are more than likely going to have to defend yourself.

In a SHTF Scenario you need to be on the lookout for everything including people impersonating law enforcement and military personnel. During a catastrophic event, you will most likely see criminals preying on the innocent by pretending to be either police or military officers. You have to be able to quickly determine who is who, or stay away from people at all costs.

3. Law Enforcement and the Military Will Try to Take Your Guns.
Think it can’t happen? It already has! In the aftermath of Hurricane Katrina, New Orleans Police Superintendent Eddie Compass ordered all local law enforcement, including the U.S. Marshalls office and the National Guard, to seize all civilian firearms.

Without warrants, armed National Guard troops and New Orleans law enforcement officials forcibly confiscated over 1,000 legal firearms from law abiding citizens. The New Orleans gun confiscation should serve as a warning to how the government and law enforcement officials will react during a large scale national disaster.  It is extremely likely that they will come for your guns!

4. Gangs & Raiders
If things go bad, there will likely be more people who mean to do you harm than there will be people who are prepared. This is something that you must accept and learn to deal with.  The fact is, most people have no idea what it really takes to survive and once their safety net is removed they will become increasingly desperate and unpredictable.
Let’s face it, even during the good times there’s a certain segment of our population that’s just downright insane. From the idiots who go nuts and riot after their team loses a game, to the violent criminals and gangs who are already terrorizing big cities throughout America, there’s little doubt that a total collapse would make urban living almost impossible.

5. You need to be able to Defend Yourself.
During an extreme emergency situation the lunatics of the world are going to be roaming the streets looking for easy victims to target.  If you’re serious about survival, you need to train yourself in multiple self-defense styles and techniques. This means arming yourself with not only weapons, but also with the knowledge of how to defend yourself without them.
Sanitation Issues

6. Garbage will become a Killer.
This is a topic that’s not often discussed, but it’s one that will probably become a real problem during a SHTF situation. Often, people who talk about urban survival worry about things like raiders and roaming gangs, but the real danger might actually come from something that you already have in your home

7. You have to Stock up on Sanitation Items
When planning to survive in any long-term survival situation, one thing that’s often overlooked is the dangers associated with a lack of adequate sanitation. I know it’s not a pleasant thing to think about, but this one issue has the potential to kill more people than any other survival topic that we can talk about.

Making it through a survival scenario often comes down to how well you can control your emotions. Keeping a positive frame of mind, even in the face of an unthinkable threat, will help you process what’s happening and will help you respond to the situation without giving into fear.

9. You must be prepared to face a number of physical and mental challenges.
From dealing with a lack of sleep and inadequate hydration, to coping with hunger pains and other stressors, survival can take a huge toll on your body. One of the best things you can do to ensure your survival, in just about any situation, is to make sure your body and your mind are trained to survive. This means motivating yourself to get off your butt and get in shape now, before it’s to late.
Communication Issues

10. You will be cut off from the outside World.
In a survival situation, knowledge is going to be a critical factor in determining the ultimate outcome of your situation. The ability to be able to predict what will happen in a survival situation is an important part of being prepared and often comes down to your ability to send and receive information.

When the power lines go down and the radio stations stop transmitting, there’s one line of communication that will still be alive and well.  Having a good Multiband Ham Radio will allow you to send and receive critical emergency information during a disaster. It’s also a great way to find alternative news sources from around the world.