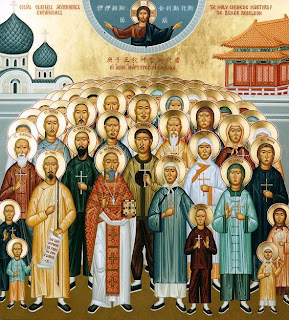 As is well known, a severe persecution broke out in China against all Christians in general, and in particular against those of the Orthodox mission. Sufficient details of this persecution are already known. Let eyewitnesses inform us of the atrocities in China, since the horrors recall those such as suffered under Nero and Diocletian.

We learn from a recent letter in the Moscow News of the Archimandrite Innocent, leader of the Russian Orthodox Mission in China (and as is already known for a long time, the Russian Orthodox Mission is active both in China and Japan), that the recently-formed Orthodox community in China now has its martyrs and confessors of the faith, since they recall the martyr sufferings of the ancient Christian Church.

A feeling of holy emotion is truly born in the soul of the reader before such exemplars on behalf of Christ’s name in days of self-sacrifice; let Godly zeal and pious inspiration not at all be separated.

June 11, 1900 was, above all, a day of martyrdom for Orthodox Chinese in Beijing. Some of them, at the horrible prospect of such death and suffering, renounced their faith in Christ and sacrificed to idols, so that they might save their lives. Nevertheless, others boldly confessed Christ by undergoing sufferings and death. The end was frightful for such people.

At first, the Boxers mutilated her and then threw her on the ground half-dead. When she recovered, a non-Christian watchman heard her groaning and carried her to his station. A short time later, she was subjected again to new tortures that resulted in her death. But in both instances, she rejoiced and confessed the name of Christ in the face of her torturers. After the frightful events of that first night of persecution, peace-loving Chinese citizens found an eight-year-old boy, John Tsi, son of the priest who was likewise murdered,[1] mercilessly mutilated by the Boxers.

To their question whether he was suffering much, the boy replied with a smile on his lips: “Suffering on behalf of Christ is no burden.”

The blood of the martyrs has always been seed from which flourishing Christian communities have grown again in non-Christian countries. We pray then that this frightful persecution may at length be a cause for encouragement for both like-believing missions and the little Orthodox flock in China and become, on the contrary, a starting point for greater zeal and a broader expansion of the Kingdom of God in those countries, in glory of the Scriptural saying: “My gospel will be preached in all the world” (Matthew 26:13),[2] and again: “Many will come from East and West and recline with Abraham and Isaac in the kingdom of heaven.”[3]