Readers, we have just witnessed with shock and  sorrow what Islamic jihad extremist  ideologies can do to negatively influence people, their reasoning  and their actions as witnessed by the recent shooting tragedy in France involving a Muslim gunman killing three Jewish children plus several other victims. (See my previous articles.)

Gunman Merah claimed he killed the Jewish children to avenge Israeli/Jewish linked deaths of Palestinian children. Fueled by Islamic extremist doctrines of revenge, Merah shot and killed 3 Jewish children, wounding a fourth, and killed the father of two. Previously Merah had killed several French soldiers, to avenge Taliban deaths in Afghanistan: French troops are there. Four Jewish children, thousands of miles from Israel and in no way involved in the conflicts, were horribly victimized by a gunman poisoned by pseudo-religious doctrines of hate and revenge.

Such radical ideologies of hatred and constant war (jihad) to further the spread of Islam worldwide and to terminate all opponents have proven to be a very real enemy of both Christians and Jews alike to this day. Although some prove a threat to Jews primarily in Israel, far more Christians than Jews have been persecuted and murdered by Muslim extremists, since the founding and establishment of Islam approximately 622 A.D.

However, it must be emphasized that not all Muslims agree with Islamic extremist ideologies that promote hatred and violence. People retain the right to be individuals holding their own personal outlook on everything, and not to be stereotyped.

I personally have enjoyed friendships with peaceful Afghani Muslim refugees from the previous Russian invasion of Afghanistan. Shah Nawaz, his wife Sultan and many children were a delightful family that I had dinner with several times in the Washington DC area, to interview them. After enjoying a huge traditional Afghani dinner, served on a special covering on the floor and eaten with our fingers, Shah would reminisce about the past.

"You know, Pamela-jon, we are a very peaceful family..we hated the violent Taliban...we loved the Americans we met in Kabul...I drove a truck for the American Embassy in Kabul before the Russians came..." They knew I was a Christian, but there was no hostility on their part, and certainly none on mine. We became friends as stereotypes gradually faded on both sides.

However, tragic accounts of ongoing Muslim violence and oppression against Christians are frequently reported from across the globe. As Christians we are exhorted by God's Word to stand steadfastly with our spiritual brethren worldwide, with both prayer, compassion and practical ways as well. Please read the following report and PRAY.

The following article was originally published by the Stonegate Institute.
Half of Iraq’s indigenous Christians are gone due to the unleashed forces of jihad, many of them fleeing to nearby Syria; yet, as the Assad regime comes under attack by al-Qaeda and others, the jihad now seeps into Syria, where Christians are experiencing a level of persecution unprecedented in the nation’s modern history.

Likewise, some 100,000 Christian Copts have fled their native Egypt since the overthrow of the Mubarak regime; and in northern regions of Nigeria, where the jihadi group Boko Haram has been slaughtering Christians, up to 95 % of the Christian population has fled. 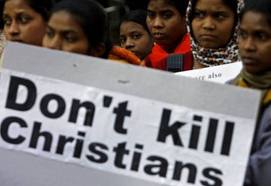 Meanwhile, the “big news” concerning the Muslim world in the month of February—the news that flooded the mainstream media and had U.S. politicians, beginning with President Obama, flustered, angry, and full of regret—was that copies of the Koran in Afghanistan were burned by U.S. soldiers because imprisoned Muslim inmates were using them “to facilitate extremist communications.”
Categorized by theme, February’s 2012 batch of Muslim persecution of Christians around the world includes (but is not limited to) the following accounts, listed in alphabetical order by country, not severity. 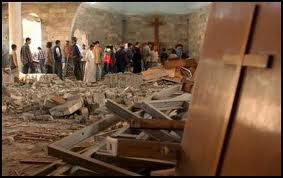 Algeria: Armed men raided and ransacked a church formally recognized since 1958, dismantling the crucifix above the premises. The pastor and his family, trapped inside, feared that “they could kill us.” The pastor “has been repeatedly threatened and attacked since being ordained as pastor in 2007. In the summer of 2009 his wife was beaten and seriously injured by a group of unknown men. Then, in late 2011, heaps of trash were thrown over the compound walls while an angry mob shouted death threats.”

Egypt: Thousands of Muslims attacked a Coptic church, demanding the death of its pastor, who, along with “nearly 100 terrorized Copts sought refuge inside the church, while Muslim rioters were pelting the church with stones in an effort to break into the church, assault the Copts and torch the building.” They did this because a Christian girl who, according to Islamic law, automatically became a Muslim when her father converted to Islam, fled and was rumored to be hiding in the church. 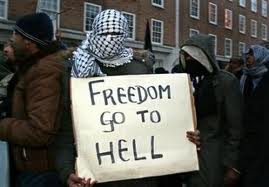 Iran: Iran’s Ministry of Intelligence has ordered the last two officially registered churches holding Friday Farsi-language services in Tehran—Farsi being the nation’s language—to discontinue the language: “Friday services in Tehran attracted the city’s converts to Christianity as well as Muslims interested in Christianity, as Friday is most Iranians’ day off during the week.” Banning church use of Farsi prevents most Iranians from hearing the Gospel.

Kazakhstan: A new report notes that “Churches are being raided, leaders fined and Christian literature confiscated as the Kazakh authorities enforce new laws intended further to restrict religious freedom in the country.” 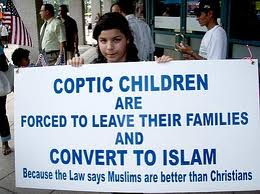 Kuwait: A parliamentarian is set to submit a draft law banning the construction of churches. Originally, Osama al-Munawer announced on Twitter his plans on submitting a draft law calling for the removal of all churches in Kuwait. However, he later “clarified,” saying that existing churches can remain, but the construction of new ones must be banned. 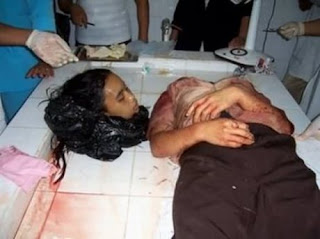 One of three Indonesian young girls
beheaded by Islamic extremists

Macedonia: A two-century-old in response to lies spread against Christians concerning “a carnival in which Orthodox Christian men dressed as women in burkas and mocked the Koran.” Earlier, “perpetrators attacked a[nother] church in the nearby village of Labunista, destroying a cross standing outside” and “also defaced a Macedonian flag outside Struga’s municipal building, replacing it with a green flag representing Islam.”

Nigeria: A Muslim suicide bomber forced his way into the grounds of a major church, killing two women and an 18-month-old child during Sunday morning service; some 50 people were injured in the blast. In a separate incident, Muslims detonated a bomb outside a church building, injuring five, one critically: “The bomb, planted in a parked car, was left by suspected members of Boko Haram, which seeks to impose sharia (Islamic law) throughout Nigeria.” 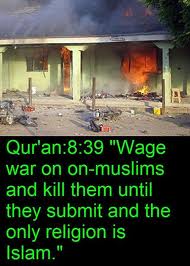 Pakistan: A dozen armed Muslims stormed a church, seriously wounding two Christians: one man was shot and is in critical condition, the other risks having his arm amputated; another church member was thrown from the roof, after being struck repeatedly with a rifle butt. “The extremist raid was sparked by charges that [the] church was trying to evangelize Muslims in an attempt to convert them to Christianity. The community several times in the past has been the subject of assault and the pastor and his family the subject of death threats.” As usual, the police, instead of pursuing the perpetrators, have opened an investigation against the pastor and 20 other church members.

Syria: Some 30 armed and masked jihadis attacked a Catholic monastery—unprecedented in Syria’s modern history—demanding money. According to the Catholic Archbishop of Damascus, “the situation in the country is spiraling out of control as the armed opposition spreads its influence to different regions of the state.” 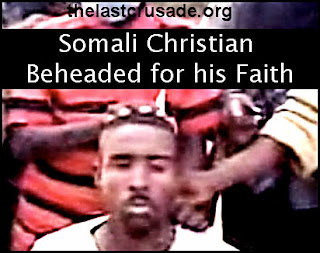 Dhimmitude
[General Abuse, Debasement, and Suppression of non-Muslims as “Tolerated” Citizens]
Bangladesh: Three American Christians were injured after their car was attacked by a Muslim mob that suspected they were converting Muslims into Christians: at least 200 angry locals chased the missionaries’ car and threw stones at it, leaving three with cuts from broken glass. 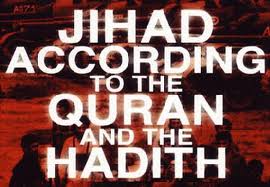 Egypt: Rather than punishing the perpetrators who opened fire on and ran tanks over Christians protesting the constant destruction of their churches, the government arrested and is trying two priests in connection to the Maspero massacre. And although Egypt’s new parliament has 498 seats, only six are Copts, though Copts make up at the very least 10% of the population, and so should have approximately 50 seats. Finally, evincing how bad the situation is, Coptic protesters organized a demonstration in front of Parliament to protest “the disappearance and abduction of Coptic girls.”

Indonesia: The Islamist Prosperous Justice Party complained about the Red Cross’ symbol of a cross, saying it is too identifiable with Christian culture and traditions. Red Cross volunteers and activists rejected the claim, saying that any changes to the logo would be “tantamount to giving in to the extremists.”

Iran: A pastor of a major house church movement began serving a five-year prison sentence for “crimes against the order.” According to one activist, “His ‘crimes’ were being a pastor and possessing Christian materials.” He is being beat in jail and getting sick, to the point that his hair has “turned fully gray.”

Israel: A mob of some 50 Palestinian Muslims stoned a group of Christian tourists atop Jerusalem’s Temple Mount, wounding three Israeli police officers in the process. The attack is believed to have been instigated by the former Muslim mufti of Jerusalem.

Pakistan: Yet another Christian woman, a teacher, has been targeted by Muslims due to false allegations that she burned a Koran. A mob stormed her school in an attempt to abduct her, but police took her into custody. Also, a Christian student who missed the grade to get into medical school by less than 0.1% would have earned 20 extra points if he had memorized the Koran—though no bonus points for having similar knowledge of the Bible.

END OF PART ONE
Posted by Pamela Rae Schuffert at 7:07 PM