In Loving Memory of Miriam Monsonego, Victim of Terrorist Attack in France 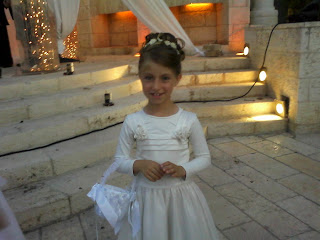 Miriam Monsonego is the daughter of  Rabbi Yaakov and Mrs. Monsonego. Rabbi Monsonego is the principal of Otzar Hatorah school in Toulouse, France, where the massacre of the innocents took place. Little Miriam reportedly died in her father's arms as paramedics tried to resuscitate her. The brutal gunman reportedly chased her across the schoolyard, siezed her by the hair and fired three bullets into her head point blank.

Little Miriam was the much awaited baby in their family, the youngest child in the family.

Miriam comes from a noble lineage of a great family of rabbis , the Monsonego Family, Av Beth Din from father to son since 1492 from Spain, and Great Rabbi of Morocco. 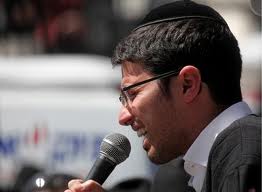 In a wrenching eulogy, Avishai Monsonego, the older brother of Miriam, cried in Hebrew: "Miriam, I am not worried about you. Since a young age you have been speaking with the Holy One, blessed be he." He said he had only one request of God -- to give his parents the strength to carry on.

Speaking to Channel 10 News while holding back tears, Avishai Monsonego, who lives in Jerusalem, said, “The last time I talked to her was on the phone. She wanted to ask what I'll name my daughter.”

He added, “Sometimes people think that it happened because we were sent to France, but I think that more people are killed in terrorist attacks in Israel than abroad. That's not the reason it happened. That’s what G-d decided and that’s what had to be.”

“The feeling I am getting now is similar to what many Jews have felt over 2,000 years,” said Avishai Monsonego. “The feeling of grief, of losing a family member. I know that Mom and Dad were waiting for her a long time. She was the last child in the family.”

May Ha'Shem, ha kadosh baruch Hu, and His eternal Mashiach, bless you and your family, dear Avishai. I am praying for your strength to go on, as well as the rest of your family. Always remember from the eternal promises of Ha'Shem throughout Holy Scriptures, that He loves you with an everlasting love, and He will bring you safely through the valley of the shadow of death and heartache. He remains on the side of His people. 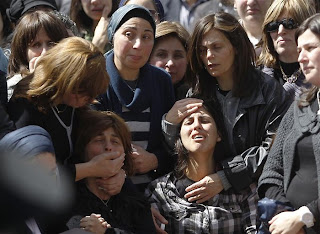 Mother and sister of Miriam Monsonego at funeral, Jerusalem
I must confess, it is difficult to type through tears. But as I followed this tragedy from the time the terrorist attacks took place in France, to live coverage via the Internet of the moment of police confrontation that finally ended Merah's bloody siege, my heart has been devastated along with thousands of other mourners as well. What mothers' hearts across the globe would not be grieved over such events that cost, among others, the lives of three precious children?

I have personally worked with children, the love of my life,  for many decades. One of the most moving experiences was to care for young Jewish children at overnight summer camps. I loved them as if they were my own children! To this day, many years later, their names and faces remain engraved in my memories and in my prayers. And now, three little Jewish children are dead, and my heart remains in grief and prayer for surviving members of their families.

Why, oh WHY must the helpless and innocent CHILDREN become the victims of the cruelties and insanity of this world? 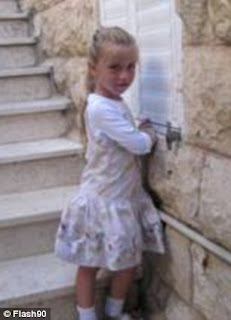 Readers, please join your hearts of compassion with those suffering such great loss at this time. Pray deeply for strength and comfort and healing for all surviving family members.

Prayer coupled with compassion can know no boundaries, whether religous or international, and this is truly a time for both.

With love to Rabbi Yaakov and Mrs. Monsonego, dear brother Avishai and family, and all beloved members of the Monsonego family,