Government COINTELPRO will often go far to besmirch the character and reputation of people they don't like or consider a threat to their agendas. I have been the subject of attack by several people known to work for government COINTELPRO operations in the past.

Such writers have falsely accused me of various things througout the years, none of which accusations were ever proven nor had any solid basis.

But I have noticed on FACEBOOK the name "Pamela Schuffert" appearing, accompanied with a younger woman with a seductive pose and mannerism.

Not me! (FACEBOOK image)
Note almost naked upper body and bed behind her.
Very suggestive and highly inappropriate.

This is not ME. 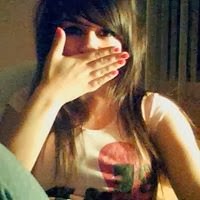 Again, not me. I am at least 20 years older and blonde with green eyes.

My FACEBOOK name will always appear as "Pamela Rae Schuffert," and NOT "Pamela Schuffert."

Personally, I am sure this was done to help discredit me and my Christian testimony and to mislead people away from the REAL "Pamela Rae Schuffert" as they research on the Internet.

And so, I am warning my readers of the difference between the two.