The husband of the family I am staying with in Appalachia is a Messianic Jew who loves Jesus His Messiah. A few weeks ago he received revelation he believes from God's Holy Spirit about the New Madrid Fault zone and coming earthquake.

Many of you have heard various rumors and reports about this potential earthquake to come to this region.

We had prayed about this with his family members and wife at his home. Here is what he shared with us one day.

God had given  him a dream/vision the previous night.

He shared how God showed him that THE EARTHQUAKE WOULD ABSOLUTELY COME, and that it would LITERALLY DIVIDE AMERICA IN TWO at that time.

He shared how God spoke to him and told him that Christians whose spiritual house was not founded on the FIRM ROCK of JESUS CHRIST and unwavering faith, would find their faith shaken and that many would also fall away at that time.

Because this major quake would be used to TRIGGER MARTIAL LAW. The Constitution will be suspended. Christian freedoms guaranteed with it WILL BE ABOLISHED. We will come under PRESIDENTIAL EXECUTIVE ORDERS turning America in a MILITARY POLICE STATE.

THIS HAS BEEN THE GOAL OF THE NWO MASTERMINDS AND MADMEN FROM THE BEGINNING FOR OUR CONSTITUTIONAL SOVEREIGN REPUBLIC! They WANT the Constitution to be abolished. They WANT America to become another communistic police state to be melded with world globalist communist (NWO) nations for a ONE WORLD GOVERNMENT.

The NWO has been working continually to plot how to CREATE DELIBERATE DISASTERS sufficient to trigger MARTIAL LAW and to hence ABOLISH THE CONSTITUTION, to then bring America under PRESIDENTIAL EXECUTIVE ORDERS turning America into  THE NWO POLICE STATE.

Regarding previous earthquakes such as HAITI and JAPAN, I have received numerous emails with links indicating the suspicious presence of PROJECT HAARP FREQUENCIES (ELF) and other unexplained strange phenomenon  detected in their regions immediately prior to the earthquakes. And NOW reports of evidence of similar PROJECT HAARP ELF ACTIVITIES are being reported as taking place (for a while now) at the New Madrid Fault Zone area. Coincidence??? Many of us don't think so!

Would the US and  cooperating foreign military be so cruel and so brazen and insensitive to human life and suffering, as to use their Project HAARP equipment in such a destructive manner???

IF IT FURTHERS THE GOALS OF THE NWO AGENDA (which controls our US military,) YES THEY WOULD!!! And I believe they already have. The first thing they did after the HAITI EARTHQUAKE was to DECLARE MARTIAL LAW and bring in the US and foreign troops!

Was the HAITI EARTHQUAKE deliberately triggered by our PROJECT HAARP for a convenient PRACTICE EXERCISE for the US NWO military agenda to rehearse the agenda when earthquakes trigger martial law in the USA? Very possibly so!

When MARTIAL LAW is declared in North America, persecution of North American Christians would immediately  follow, even as I have patiently outlined for 15 years now about what will happen when martial law is declared following a major disaster in our nation. Former CIA officers working at one time for the NEW WORLD ORDER agenda under Bush Sr and other directors, admitted much to me about the coming MARTIAL LAW AGENDA for our nation planned by the NEW WORLD ORDER strategists.

FEMA will then  begin to seize churches and Christian buildings under Presidential Executive Orders which will absolutely permit this to happen "legally."

The CHRISTIANS (much hated by the New World Order as the ULTIMATE NWO RESISTERS)would then be rounded up, placed in boxcars with shackles wherever possible, or transported by helicopter, bus or whatever means that can function following a major earthquake, to the many FEMA and other detention camps to be  "evacuated" (actually eliminated as NEW WORLD ORDER resisters.)

Or possibly executed (or BEHEADED under NOAHIDE LAWS to be activated under martial law) on sight by the UN/NATO troops trained for this long anticipated hour of NWO MARTIAL LAW TAKEOVER, if transportation means (boxcars and shackles, etc.)cannot be used due to severity of earthquake damages.

My in depth research and reporting on this strange subject reveals that both US and foreign military have been trained to operate the MODERN MILITARY GUILLOTINES on all NWO resisters, again especially targeting CHRISTIANS who they know will NEVER accept their NWO agenda due to the Bible beliefs forbidding participation in their satanic NEW WORLD ORDER outlined in REVELATION 13 of the Bible.

Eye witnesses have reported to me that the guillotines have been sighted in PRISONER BOXCARS WITH SHACKLES, as in COLUMBIA FALLS, MONTANA in 1995.

5 Christian people on a missionary prayer journey across America stumbled upon these strange black boxcars while taking pictures near Glacier National Park. I sat and talked with the leader, Marie, personally, who admitted to me what they saw, and how shaken they were...especially then they realized that besides prisoner shackles, they saw MODERN GUILLOTINES in every boxcar.

Revelation 20:4 indicates that CHRISTIAN WHO RESIST THIS NWO AND IT'S CASHLESS SOCIETY (Revelation 13) BY REFUSING TO RENOUNCE JESUS CHRIST AND THEIR CHRISTIAN FAITH WILL INDEED BE SUBJECT TO BEHEADING DURING THIS TIME PERIOD.


IF and WHEN the NEW MADRID FAULT EARTHQUAKE OCCURS, FOOD AND WATER MAY NOT BE AVAILABLE TO MANY. And the government/military/FEMA relief agencies to be set up will probably require victims to utterly compromise their Christian belief system in order to receive government/military assistance at that time.I was warned that this would be case, and the policy will be "COMPLY OR DIE!"

While the earthquake has the potential to destroy some people, the resulting declaration of MARTIAL LAW and it's brutal enforcement following any major earthquake will undoubtedly KILL MANY MANY MORE AMERICANS!

15 years of my previous reports, many of which are still available on the Internet and in this BLOG, are available for you to read outlining the general NWO MARTIAL LAW STRATEGY for our nation.

I have been receiving consistent reports from many sources confirming that MILITARY PROJECT HAARP FREQUENCIES are being identified and detected as appearing increasingly OVER THE NEW MADRID FAULT region. When HAARP frequencies are beamed into the GROUND, they have the potential to create EARTHQUAKES! The military apparatus of the nations know this and have used it already to trigger various previous earthquakes. HAARP is suspected now in the HAITI earthquake, the JAPAN earthquake and several others as well.

Did you know that RUSSIA is beaming PROJECT HAARP FREQUENCIES 24/7 into YELLOWSTONE NATIONAL PARK every single day? How do I know? Because I WORKED THERE ONE SUMMER! I was handed a sheet of paper frankly informing me that WE WERE BEING HIT WITH HAARP FREQUENCIES FROM RUSSIA 24/7! (All employees were handed this fact sheet.)

And when HAARP frequencies are beamed int the ground, THEY SOFTEN THE GROUND...and are able to hence HELP TRIGGER EARTHQUAKES as a result! Now WHY, oh WHY would Russia be beaming PROJECT HAARP frequencies into Yellowstone NP?

Because this is a region (Montana/Wyoming/Idaho) filled with bold NWO resisters, American Patriots well informed, well armed and prepared to take on the NWO martial law agenda. After spending years of research in Montana and that region (Pacific Northwest) I discovered this personally and interviewed many future NWO resisters and militia members.

The US government wants martial law in this region, so they can go after these NWO resisters, seize their many weapons, and remove them to the camps and eliminate them once and for all. It is in their interest to trigger (or SIMULATE) the Yellowstone SUPERVOLCANO eruption, to declare martial law regionally there.

And because Russian is in secret alliance with the US GOVERNMENT/MILITARY for a mutually beneficial martial law agenda, Russia's PROJECT HAARP is being used on YELLOWSTONE. Russian troops will be used heavily to patrol America under martial law and to operate some of the detention camps, as in up in ALASKA.

Truthfully, Yellowstone National Park has ENOUGH OF HER OWN BEARS, without the aggressive "RUSSIAN BEAR" (the BEAR is the national symbol of RUSSIA) intruding into America's most beloved National Park!

Friends and Christian readers, can we PRAY that GOD IN HIS MERCY will HOLD THIS BACK a season longer at this time? The earth is the LORD'S and the FULLNESS THEREOF! It remains HIS CREATION! He has power of ALL HIS CREATION!

While God did NOT give this Messianic Jew ANY timeline (date-setting is foolish, especially in something of this nature where prayer and God's mercy can change things) it seems that the Holy Spirit indicated that it was potentially SOON TO COME.

People, PLEASE prepare accordingly! Act SPIRITUALLY with wisdom and act PRACTICALLY with God's wisdom as well. PURCHASE your emergency supplies while they are available! Especially for people who are in the NEW MADRID FAULT earthquake zone. Below is a MAP of the region that would be affected severely: 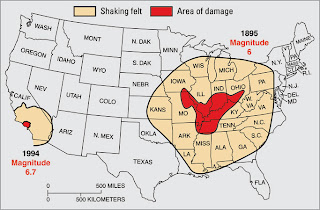 If this earthquake comes as many sources seem to indicate from scientific and other research, ARE YOU PREPARED TO FACE ENSUING "MARTIAL LAW" and the hardships that will accompany this tragedy???

Christians, are YOU prepared to face this as well? Are you prepared to be faithful unto death should persecution of Christians follow this or other disasters coming to our nation???

This is a time for intercessory prayer for God's people and receiving revelation and direction at this time. It is also a time for reinforcing our faith and commitment to Christian truths and eternal principles and confessions of our faith.

And if you are NOT a Christian, isn't it TIME that you gave your life to Jesus Christ, to obtain forgiveness for YOUR sins, so that IF YOU DIE IN THE COMING EARTHQUAKE or many other disasters America faces(such as tornadoes, etc.) you will NOT perish or go to HELL, but receive forgiveness and eternal life instead!!!

My dearly beloved blog readers, never say you HAVE NOT BEEN WARNED!