Yesterday I had the privilege of attending PASTOR CHUCK BALDWIN'S LIBERTY ASSEMBLY meeting in the Red Lion Hotel, Ballroom A, at 2:PM. 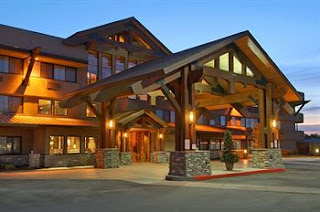 Only months ago, Pastor Chuck relocated from Pensacola, Florida to the Kalispell area.

Many of my readers are familiar already with Pastor Chuck's email newsletters and publications. Besides being a warrior for Jesus Christ and the Gospel, Pastor Chuck is also a warrior for LIBERTY in our nation, America.

Because of the great degree of government infiltration into every movement associated with battling for America's liberties in this critical hour, including infiltrating their federal agents into even pastor's pulpits in the churches of America today, I felt a few reservations as I stepped for the first time into his fellowship and talked with him and family members. In fact, I had even payed several times before coming, that God would show me the truth about him.

It only took attending one service and talking to him and family members and attendees, to understand several things. Pastor Chuck is genuine and is NOT a government infiltrator into the Christian Patriot movement. He did NOT come here  to hold meetings, to then gather names to  secretly turn them in to the Federal government to put on watch lists.

The US government infiltrates patriot movements by training and planting their spies into "patriot radio broadcasts" or church movements. Their message is designed to draw out Americans who are anti-NWO or anti-government corruption and for liberty, etc.

Such infiltrators either gather names through "Church membership" or through selling their products to such people groups attracted to their message. This way they then obtain their names and addresses.It is reported that these names are put on classified government lists and marked for future arrest and taking away to the camps as NWO resistance under martial law. Or to be watched carefully.

Through much detailed and personal research, I actually have uncovered the names of several prominent in the Patriot movement who are confirmed traitors and infiltrators into the Patriot movement for this very purpose. so yes, this happens all the time. We would be naive in his hour to believe otherwise! However, Pastor Chuck is NOT one of these.

He is serious about his Christian walk and passionate about his stand for LIBERTY FOR AMERICANS. In short, he passed the test and for may other reasons I will not reveal.

I also met many wonderful and sincere people attending his meeting, serious of God and liberty. And of course, there will always be the nameless federal spies posing as "Christians" or "Patriots" who infiltrate such meetings. (Sigh...)

Pray for Pastor Chuck and protection for him and his entire family.

I know for a fact that the Federal government and military presence here, which is preparing intensely for the NWO agenda of the future for this region, does NOT appreciate his kind of message. In fact, an AP article recently came out in the press that essentially vilified him and misreported many things regarding him in order to attempt to discredit him and his message. This tactic of writing smear articles to defame and discredit  perceived "enemies of the state" is called COINTELPRO. I have been attacked by this tactic as well.

Furthermore, Pastor Chuck has also been named on PROJECT ECHELON'S LIST of words/names to monitor everytime they are spoken by phone and written by email or fax. Project ECHELON is a massive spy program to spy on every phone call, every email and fax or other form of communication. Every time certain trigger words are spoken or written and communicated, they trigger ECHELON spyware to track and record that message. "BALDWIN" is clearly "on the list"!


This northwestern Montana region is already very tense, with people groups on both sides preparing for major showdowns, as they seek to impose martial law  without the local citizens' consent in the future. There is in fact a large movement of NWO resistance throughout this region, with many gun owners openly vowing to fight to the death against the NWO agenda for Montana.

It is  in this potentially volatile region, that Russian and foreign troops have been regularly rehearsing for future encounters with local anti-NWO resistance.

Many sightings of PRISONER BOXCARS WITH SHACKLES have occurred for years throughout this region. recent reports of FEMA COFFIN LINERS being sighted in rail cars have come to me recently. One trucker I met in a local church only weeks ago informed me that his trucker friends in Billings, Montana, have warned him that truckers are reportedly hauling shipments of the modern MILITARY GUILLOTINES into Billings, where there is a US Marine training facility in fact.

After I was interviewed on a radio broadcast for two hours in Kalispell a few years ago, the talk show host warned me, "BE CAREFUL! This region is SWARMING WITH FEDS who are spying on the local population..."

Locals I interviewed admitted to me they knew this was true. " We don't form open militias anymore because of Fed spying. Instead, it's like every other home has become it's own personal militia, for safety..."

I will write more about Pastor Chuck and his message in the future.