THE DRONE NIGHTMARE OVER
"AMERIKA"

Just when you thought you had heard it all about what Americans will face under the coming police state and martial law, think again. You know the  US military Predator drones you've been  hearing about being used in Pakistan to "fight terrorists", etc.? These very same type of drones will someday be used to spy upon Americans under martial law especially, and in fact are even being used NOW to spy in the USA.

In February 2012, Congress passed a bill HR 658 for 30,000 surveillance drones to be put up over US cities by 2015.  This bill wants to accelerate   the FAA's  current licensing process within 90 days for government use of drones over US airspace.  Under the bill, US airspace will be fully opened to drones by October 2015.

Without any regard for our Constitutional rights, Congress has passed this legislation. Congress did not consider civil liberties in this measure, and this bill contains no language at all designed to  protect civil rights.  Within only 3 days both the House and Senate passed the law.
The legislation requires the FAA to develop guidance on drone safety.  Their use is being passed off using such excuses like the drones will be used to monitor traffic. However, these drones can be equipped with various forms of spy devices and sensors and cameras. They can also become lethally armed against the American people as well.
Police departments are also now purchasing various kinds of drones to monitor Americans. And some will even be armed. Due to the cost of drones decreasing, more and more police departments are buying them, including the Montgomery County Sheriff's Office in Texas.

In one interview I read online, Chief Deputy Randy McDaniel of the Montgomery County Sheriff’s Office in Texas said that his department is considering using rubber bullets and tear gas on its drone.
“Those are things that law enforcement utilizes day in and day out and in certain situations it might be advantageous to have this type of system on the UAV (unmanned aerial vehicle),” McDaniel said.
The ACLU is carefully monitoring drone use over America, watching for cases of abuse and violations of human rights against Americans by these spy drones. Both the FBI and the DEA have used drones against Americans, as well as the Customs and Border Protection Agency, which already has 7 Predator B drones. 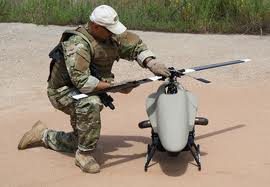 There are police departments in Florida, Colorado, Washington, Utah,  and Texas that have already purchased drones. National Guard units in New York also have them. Many other states and agencies possess various kinds of drones as well.

Drones over America will be armed in the future, first with non-lethal weapons, and later fully armed with lethal weapons that are designed to fully kill and stop their desired target. Under coming martial law and the anticipated "peoples' insurrection," would you honestly expect anything less?

There is a huge potential for abuse of peoples' rights with such powerful and potentially lethal weapons of mass spying on the American people. Also, drones have a tendency to crash more frequently than conventional aircraft.

For example, several drones have previously crashed along the US/Mexican border.

Here is an excerpt from one group's online  interview regarding drone dangers with several ACLU spokespersons:

“It’s simply not appropriate to use any of force, lethal or non-lethal, on a drone,” said Catherine Crump, staff attorney for the ACLU. Crump feels one of the biggest problems with the use of drones is the remote location where they are operated from.

“When the officer is on the scene, they have full access to info about what has transpired there,” Crump explained.  “An officer at a remote location far away does not have the same level of access.”

The ACLU is also worried about potential drones malfunctioning and falling from the sky, adding that they are keeping a close eye on the use of these unmanned aircraft by police departments. “We don’t need a situation where Americans feel there is in an invisible eye in the sky,” said Jay Stanley, senior policy analyst at ACLU. 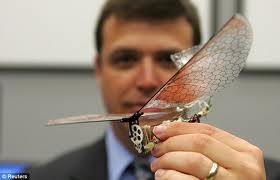 And THEN, there are the MINIATURE drones, called MICRO AIR VEHICLES, that are being developed at wright-Patterson AFB in Dayton, OH. According to one report:

"The base's Air Force Research Laboratory mission is to develop MAVs that can find, track and target adversaries while operating in complex urban environments. 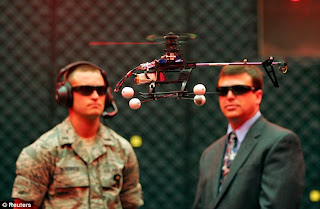 The engineers, led by Dr Gregory Parker, are using a variety of small helicopters and drones in the lab to develop the programs and software.Testing takes place in a controlled indoor environment, during which data is gathered to analyse for further development."

Looks like drones are here to stay. Quite obviously, the government and military anticipate using drones heavily and frequently against the AMERICAN FREEDOM FIGHTERS in the future mother-of-all-battles under martial law to determine WHO SHALL ULTIMATELY CONTROL AMERICA AND HER DESTINY.

Who can doubt that BIG BROTHER'S POLICE STATE is unfolding before our very eyes?