Many Americans have quickly drawn the conclusion that OIL INTERESTS are the PRIMARY REASON. However, based upon prior research,I would like to suggest there are even darker reasons BEHIND this give-away of these Alaska islands. Especially when it appears that martial law is so very near in North America.

As I write this intriguing article, I am living literally here ON THE COAST OF ALASKA. I have been here helping a friend since December 2011. No one here but God knows about  the hidden prayers I am compelled to pray over the state of Alaska, America's FUTURE SIBERIAN-TYPE GULAG STATE.

Alaska is filled with FEMA detention camp facilities and closed military bases like Fort Greeley that can also be used similarly, including America's largest known FEMA detention camp facility reportedly able to hold up to one million hapless Americans or more, under martial law. It is reoprtedly outside of Anchorage, AK.
This huge FEMA CAMP detention facility flies joint American and RUSSIAN flags...and Russian military advisers operate this gulag...uh, I mean detention camp. Just like ruthless Russian military have ALWAYS operated Russia's infamous Siberian gulag detention camp system for decades.
MILITARY AND DETENTION CAMPS (with sordid abuses of prisoners) always seem to go together...kinda like a macabre version of "eggs n' bacon" or "burgers and fries"combinations: one just doesn't seem complete without the other.


Some years ago, I was a guest on Lennie Bloom's "CLOAK AND DAGGER"broadcast, then out of Toronto, Canada, with his co-host Sherman Skolnick.

As they interviewed me about my in-depth investigative journalism exposing the New World Order gulag agenda for Canada, Sherman Skolnick interrupted me to insert some startling information:

"Did you know that, even as we are speaking, RUSSIAN MILITARY UNDER SECRET TREATY WITH THE US GOVERNMENT are building DETENTION CAMPS FOR AMERICANS ON ISLANDS OFF THE COAST OF ALASKA????" 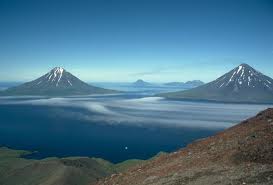 Aleutian Islands
No, I didn't...but I did know through a previous trip to investigate NWO agenda in Alaska, that it was destined to become AMERICA'S FUTURE "GULAG STATE."

The detention camps and closed bases are HERE. The UN/FEMA prisoner boxcars with shackles are HERE. Foreign troops are HERE. A joint American/Russian military tunnel beneath the Bering Straits (using military nuclear boring machinery) is HERE.

Detention camps for Americans off Alaska's coast are HERE.

Based on years of researching the NWO agenda for America, and repeatedly uncovering Russia's secret involvement at various times, I personally believe that this island give-away may be tied in more with theRussian role in detention camps for Americans under martial law...perhaps Alaska's versions of "Alcatraz" prison to detain America's most determined "NWO RESISTER" freedom fighters under MARTIAL LAW. 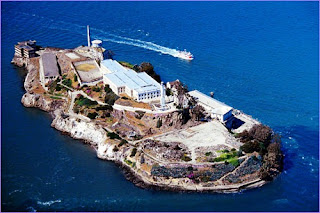 Alcatraz prison island, California
Although at that time of our broadcast in 2004, Skolnick alluded to the Aleutian Islands as where they were secretly building the detention camps, ANY  isolated islands with appropriate terrain can be used for such purposes. Keep a watchful eye on Alaska, the future "GULAG STATE."
Posted by Pamela Rae Schuffert at 10:21 PM