Note-Is all this BECAUSE they KNOW what is to soon come???

National training against nuclear attack starts May 6 in Montana 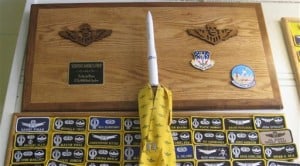 In this March 30 2010 photo, a shrine dedicated to Air Force units that maintain nuclear missiles adorns the wall of the Judith Gap Mercantile in Judith Gap. In America's nuclear heartland, where underground missile silos dot the landscape, a U.S.-Russia treaty proposed in 2010 to reduce nuclear weapons was nothing short of alarming. The military workers who maintain those missiles support cities as large as Great Falls, where 40 percent of the economy depends upon Malmstrom Air Force Base, and businesses as small as the Judith Gap Mercantile, where passing airmen buy milkshakes by the dozen. If they follow the missiles out of town, the economies here could be crippled.
Enlarge Photo
GREAT FALLS – Montana will be the site of a large training exercise next week as military officials prepare for the worst of all fears: an attack on nuclear facilities.
Personnel at Malmstrom Air Force Base near Great Falls regularly test how they’d respond to such a dangerous incident.
But the Great Falls Tribune reports that starting Monday, the base – along with Fort Harrison in Helena – will be the focus of a national exercise bringing about 1,000 people to Montana.
Some state and local first-responders will also be involved, to make sure the link between military and civilians in the event of an emergency is robust.
If something bad happens, "we want to kind of go on autopilot," says Col. Rob Stanley, 341st missile wing commander at Malmstrom
There will be several scenarios: It could be a Department of Energy shipment that goes awry, or maybe a hostile action on base.
Either way, locals may notice a bit more traffic around Malmstrom and Fort Harrison, including helicopter activity and people scurrying about wearing white hazmat suits.
Federal, state and local agencies have emergency response plans, but anything involving a nuclear weapon initiates a higher response and having both military, government and civilian agencies understand the plan, lingo and how the others operate is critical.
"If it were to involve a nuke, we don’t have a lot of time," Stanley said. "It helps prevent any delay in response actions."
***
Vince Kolar with Cascade County Disaster and Emergency Services said some local first responders will participate in the exercise.
"If the real thing happens, the locals are probably going to be the first ones on the scene. We’re usually pretty involved in local exercises," Kolar said. “(The military) command structure is a little different than ours and once there’s a nuclear weapon involved, it’s a different show. It’s a little different situation for these responders than they’re used to.”
Additionally, some Montana National Guard and state emergency responders will participate.
Ed Tinsley, division administrator of Montana Disaster and Emergency Services, said meeting with counterparts at practice sessions like this is far better than getting to know them when there’s a real incident.
“Our motto is that you don’t want to meet the person you’re going to be working with at the disaster,” said Tinsley, an Army veteran. “Nothing in the world like on the ground training."