Another Good Reason WHY Martial Law May Be IMMINENT

One scandal after another is now rocking the Obama administration. 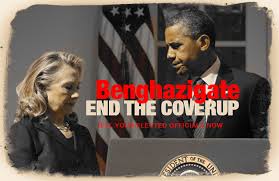 From BENGHAZIGATE, to the IRS scandal, to more Americans catching on to government sponsored black-ops for gun control agendas (like the SANDY HOOK farce) and more recently, the false-flag BOSTON MARATHON BOMBING, and SO MUCH MORE, the credibility of this administration is being shaken to the core.

So much so, that Valerie Jarrett has just called a meeting of left-wing liberal media reporters for a special meeting in the White House (undoubtedly to plead for help in covering up Obama's ineptitude and White House/government corruption and emerging scandals.)

Whenever this happens with a President, there is a desperate need for DISTRACTIONS to take the heat off the guilty party.

There is also increasing talk of IMPEACHMENT OF OBAMA.

Obama is obviously very nervous about all of this now.

Here is something interesting you need to know.

The President who is in power when
MARTIAL LAW/NATIONAL EMERGENCY
comes down at last,
THAT PRESIDENT WILL BECOME DICTATOR FOR LIFE OVER AMERICA. 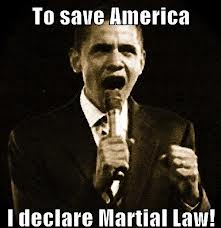 He will be the last elected President
that America will ever have. 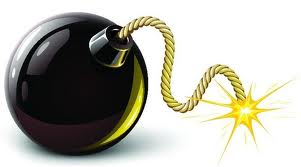 My, my, how convenient! Something else to distract the public eye from Obamagate scandals!

And here comes MARTIAL LAW just in time to rescue OBAMA, and lock him into power..???

Or...is there another dark plan in place? Will he get conveniently assassinated by the NWO schemers, in order to bring other NWO agenda players into the foreground???

Only time will tell...and events are now happening rapidly.

Hey...who needs a Hollywood thriller movie in today's America any more? Just watch the unfolding events all across this nation!

Because YOU and I and MILLIONS of fellow Americans are all a part of the unfolding saga of "AMERICA UNDER MARTIAL LAW."

~WATCH AND PRAY~
Because the warning signs are obvious... 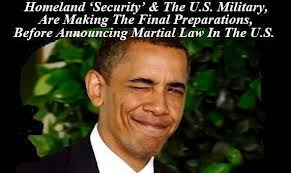