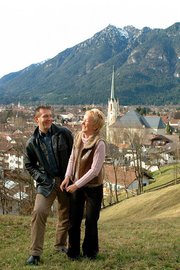 My blog and accompanying ministry stands proudly beside Pastor Frank Erlandsen and his lovely wife, Ingrid, of Trondheim, Norway. Pastor Frank pastors Bethel Church in Norway. After being out of contact with Pastor Frank and Ingrid for over ten years, I have finally located them through FACEBOOK! 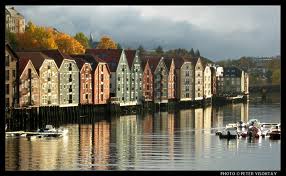 I was privileged to meet this dynamic Christian couple while performing investigative journalism in Germany for 6 months in 2001, my home base then being located in  beautiful Garmisch Partenkirchen, Germany. Garmisch, located deep in the heart of the Bavarian Alps, is dear to my heart, since I had been raised in Germany during my early years and spent much time on vacations as a young child there.

My never-ending love affair with mountains and coniferous forests of fragrant pine began in fact in Germany as a child. Also my love for spicy German gingerbread houses and cookies as well. This is why I have spent so much time living in lovely MONTANA. It is so much like the Bavarian Alps! 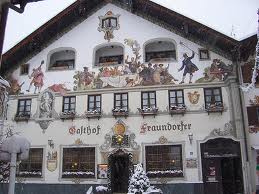 In January of 2001, I flew to Garmisch Partenkirchen, to begin 6 months of investigative journalism and Christian outreach in Germany. My home base would be the Zugspitze campgrounds near the base of the highest mountain in Germany, Zugspitze. My home was a tiny "ski shack" in these campgrounds. I learned to cook all my own food on a tiny camp stove in that little ski hut, surrounded with snow and beauty everywhere.

I had a great need for Christian fellowship there in Garmisch, and somehow happened to locate Pastor Frank's church there at that time. Immediately I was impressed with his sincerity and love of God and the Gospel. Pastor Frank spoke excellent English, as did his lovely wife Ingrid. 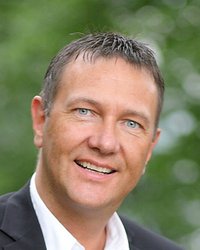 So enraptured with Jesus was this young man, that he would often jump around excitedly as he preached the Gospel to the German crowd at his meetings there in Garmisch. Pastor Frank was then associated with JESUS REVOLUTION, a wonderful and uplifting Christian outreach out of Norway. Jesus Revolution would bring young people to perform Christian street outreach in places like Garmisch, in fact. Everyone who came loved this dynamic young preacher filled with such zeal for God. Both He and Ingrid touched the hearts and lives of many, many people in Garmisch through their ministry in those years.

I immediately knew that this young couple was truly following the call of God in their lives, and knew that this was my Pastor while visiting in Germany at that time.

But after 6 months  of my living in Germany in 2001, tragedy struck. My mother fell, in June of that year, and had a terrible accident, and I had to fly unexpectedly home to take care of her. I lost all contact with beloved Pastor Frank and Ingrid for over ten years. In vain I sought to find them and re-establish contact. But I never succeeded, to my great sadness. But I kept them faithfully in my prayers repeatedly, knowing the CALL OF GOD was upon their lives.

And then, after deciding I would try to locate them through FACEBOOK, I stumbled upon them (only today!) I was elated. After 10 years of praying for them at a distance but being out of contact, I was able to message them and communicate with this wonderful couple once again! Halleluia! I was thrilled to receive communications back from them at last.

Please pray for beloved Pastor Frank and Ingrid in their much-needed ministry there in Norway. So many people, including among the youth, are lost in that nation. In fact, many church burnings have taken place by dark forces operating today in Norway. There is much spiritual darkness in Norway. Nazism is rising there once again(especially among the youth), as it is in Germany and other parts of Europe.

My fellow Christian readers, let us together take hold  of their hands and pray for their church, Bethel, and their critically needed ministry in Norway. We as Christians MUST stand together WORLDWIDE if we are to make the critical difference for Jesus Christ in a lost world!

Pastor Frank and Ingrid, I am proud of you! Continue in your wonderful and dynamic work there in Norway and beyond, throughout all of EUROPE in fact! We love and appreciate you! And a lost and dying world needs MORE people like YOU!