Here in the Inupiaq village of Kotzebue, Alaska, I have found myself on the western coast of Alaska. Siberia is only a mere 87 miles away from here or so . As I gaze uneasily across the deeply frozen waters of the Bering Straits, I am ever reminded of the terrible sufferings and martyrdom of my fellow Christians, who died under many decades of brutal Communist oppression throughout the Soviet Union. 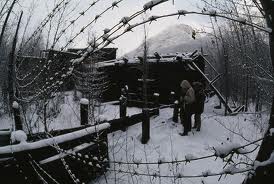 The names of bleak and harsh gulags are burned into my memories. Sakhalin,  Ussyrisk, Nakhodka, and many other locations to which political and Christian prisoners of the faith were exiled. Thanks to my former training in the Slavic Gospel Association's Institute of Slavic Studies under Peter Deyneka Sr/Jr(both now deceased), I had gained an excellent background to better understand communism in Russia, and how it affected Christians in opposition to it's teachings and principles and demands. 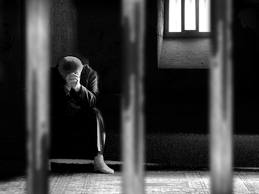 My heart began to break as a whole new world began to open to me, that of the oppressed under communism in the former Soviet Union. Religious liberties I had taken for granted in my native land America, were forbidden under communism. And those who chose to bravely oppose this terrible darkness, often paid the price with their sufferings and their lives as well. 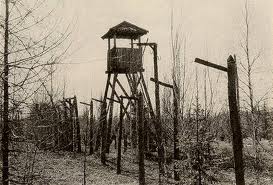 Therefore, for years I wrote letters in Russian to Christian heroes of the faith sentenced to long imprisonment terms in these gulags and other prisons. Their names are fresh in my memories: Galina Vilchinskaya, sentenced to six years in the gulags for the "crime" of printing New Testaments in an underground press. Her health was badly affected in the gulag, with teeth rotting and falling out, weakness setting in due to harsh work in the labor camp and poor nutrition. How I prayed for Galina during those years of imprisonment, along with many other Christians who also deeply cared. She finally emerged alive, and safely then came to America.

Georgii Vins was a Russian Baptist pastor, sentenced to five years in the gulags for his Christian witness in the face of communist repression. I was later to meet Georgii Vins at the Russian Ukrainian Evangelical Baptist Center in Ashford, Connecticut, (as seen below) and his wife as well.  Vins was one of the millions of true Christian heroes of the faith. 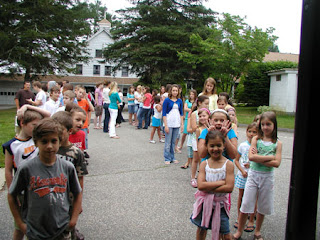 Russian Baptist camp I worked at in Ashford, Connecticut
For many years I had worked at this Russian-Ukrainian Baptist Christian Center (above), at their summer camp to minister to young Russians out of New York City, mostly unbelievers from communist backgrounds when they arrived at our camp. Every summer I enjoyed having young Russian children to take care of for several months. and every summer, so many of them actually discovered the reality of God and His Son Jesus Christ! This was a time in my life that I can never forget, working with these precious Russian youth. I love and pray for them to this day. 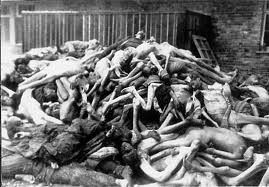 Dead bodies of religious and political prisoners in the gulag system

Many Christians were brutally tortured and martyred under communism in those grim gulags. One brave man, Odintsov, was literally eaten alive by dogs in the gulag.  Others were forced into Soviet psychiatric units and forced on mind-control drugs and to undergo brutal and inhumane treatments by the communists.

For years I relied on the Russian Baptist publication, Bratskiy Vestnik, to keep me informed about Russian Christian prisoners of the faith in prisons and gulags. I used this information to fast and pray for their well-being and for their deliverance as well.

Russian Orthodox Church
I often visited Russian churches in America, to meet wonderful Christians who told me first hand of overcoming brutal communist persecutions.I stayed with one family, that of Walter and Nina Bagrin.

I can never forget visiting their home in Canada, where the wife Nina was crying one day as she held a letter in her hand. I asked her why she was crying. She told me it was because of what the letter said.

A friend back in Russia shared how a young Pentecostal man, only 17 years old, was discovered brutally beaten and then burned to death with a blowtorch, his body then trashed in a public restroom in that city.  A note accompanied his dead body, stating that "...THIS is what happens to every man who refuses the draft into the Russian Army." He was a conscientious objector as a Christian, and had refused the draft. And sadly, paid the terrible price, Communist-style. 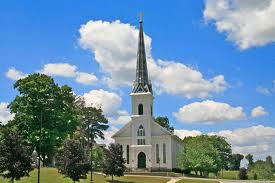 My Christian readers in North America, many of you have no realistic concept of what Christians have and are suffering even now for their faith under communist oppression. We have been spoiled here in North America by 400 years of religious freedom and liberties. My Pilgrim ancestors played a direct role in establishing this nation as "one nation under God..." and you have enjoyed the liberties that their sacrifices and their prayers helped to give birth to in the founding of this nation.

And now, America stands to lose all her heroic founders once labored for, so that we could enjoy the fruits of their labors: FREEDOM. For fifteen long and difficult years, I have struggled to report on the coming AMERICAN HOLOCAUST. Ugly world globalist COMMUNISM ( the NEW WORLD ORDER) is preparing to seize this North American continent, through deep betrayal from both within and without.

America now has her own gulag system firmly in place, through Homeland Security and FEMA camps established to deal with all NWO (communist) resistance under coming MARTIAL LAW.

Major elements of the US military have been recruited, subverted and brainwashed into the NWO ideology, and trained that it is "okay" to arrest and fire upon and transport to the camps ALL AMERICANS who will resist this communist takeover under martial law in the future.

Even Russian spies are bragging to my Russian Christian contacts here in America, saying things like:

"HA! STUPID AMERICANS! As life WAS in Russia, so shall it soon be IN AMERICA!" Sadly, "Boris and Ivan" are correct.

I know the truth about how they have prepared Alaska to become America's future GULAG.

Through research, I have uncovered the presence of prisoner boxcars with shackles already in place in Alaska. One construction worker I interviewed in Montana, Kenny, admitted to me he had met with three metal workers from different states, all of whom admitted they had been hired to weld shackles into prisoner boxcars in Alaska. I have uncovered the fact that several of the military bases closed down (including Fort Greeley) have been converted into future prisoner camps for martial law.

The largest detention camp known to date in North America is located here in Alaska, in a remote area outside Anchorage. It will reportedly hold up to one million prisoners. It boasts a landing strip, a human crematory oven, and railroad tracks that lead to it as well. Ideal, of course, for prisoner boxcars with shackles to bring their hapless NWO resister victims to this gulag-style detention camp. The very type of prisoner bocars with shackles I have been reporting on now for fiften years in fact... 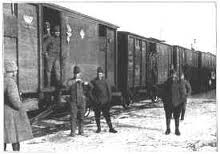 The communists extensively used the railroad systems across the vast Soviet Union to haul their prisoners to the vast gulag system of prisons under decades of communism. Using the railroads to haul prisoner to the detention camps did not begin with the Nazis. Rather, it began with the Russian communists.

Revealing (and deeply disturbing) is the fact that this huge detention camp in Alaska flies both an AMERICAN flag and a RUSSIAN flag, and that Russian military advisers are in charge of this detention camp. How very COMMUNIST POLICE STATE this is, wouldn't you say? And how indicative of the kind of grim repressive future reminiscent of the communist police state they have planned for us.

While I was on radio with Lenny Bloom of CLOAK AND DAGGER broadcast in Toronto, Canada, I was told, "Pam, do you realize that even as we are interviewing you, Russian military under secret contract with the US government are building new detention camp facilities off the coast of Alaska, on some of the Aleutian islands....???" These new detention camps are intended to hold the many Americans expected to rise up in protest under martial law, against the NWO communist police state to be imposed upon our nation in the future. 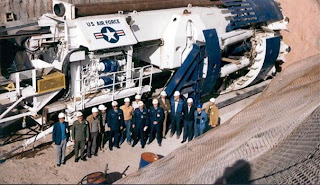 One example of the nuclear boring machine used to melt through rock, forming tunnels

One Russian source confirmed to me personally what an American military source (Colonel Jim Ammerman) revealed to me: there is a military tunnel beneath the Bering Straits, linking Siberia to Alaska at the closest point. (A joint Russian/American military project) The tunnel was not DUG, but MELTED by an incredible  military tool that uses NUCLEAR BORING. It can melt through solid rock at about 6 miles a day. For more information on these incredible nuclear tunnel boring machines, go to this link:
http://projectcamelot.org/underground_bases.html

For skeptical readers who say in their hearts, "Aw, America can never become another communist type regime, IMPOSSIBLE!" think again. As I gaze across these bitterly cold waters towards Siberia, I am reminded that, yes, history does repeat itself.

My Christian readers, are you fasting and praying for America's endangered future? Can we not learn a lesson from the past? Are you listening? And do you care? The warnings of the martyrs of the past under communism are crying out to us from Heaven's portals, "BEWARE, lest what happened to us HAPPEN TO YOU!"
***********************************

"Ha! Stupid Americans! As life WAS in Russia, so shall it soon be IN AMERICA!"
-Boast of Russian spy in Washington state

The NWO BEAST of Revelation 13 has THE FEET OF A BEAR!
The Communist NWO has moved from the beginning on the "FEET OF A BEAR," through RUSSIA and onward.....! Interesting that Russian leader Dmitri Medvedev has the last name meaning in Russian, "Of the BEAR." A portent of things to come, America? Oh,heck...why pretend? We all know Russia has long planned for decades to eventually attack the USA! And they already play a major role in martial law groundwork laid. There is so much I could say through years of research. Let's stop being so stupid and naive, America. Wake up and prepare and pray.

Posted by Pamela Rae Schuffert at 12:45 AM