Well, my readers, what have I told you in my reports years ago about the satanists' involvement in ABORTION, or LEGALIZED HUMAN SACRIFICE???

How many abortionists by DAY, are actual human-sacrificing satanists BY NIGHT, like one former abortionist  I previously exposed in Asheville NC? The satanists of America know ABORTION for what it really is : LEGALIZED HUMAN SACRIFICE! 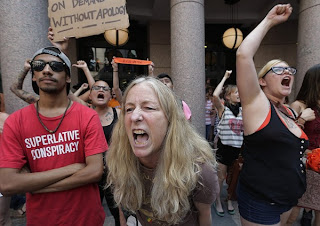 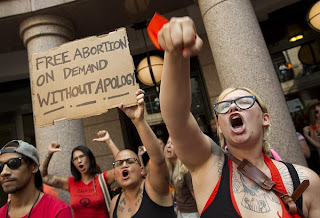 THE UGLY SIDE OF PRO-ABORTION
MURDER SUPPORTERS

It would be difficult to argue that the pro-abortion crowd wasn’t an “unruly mob” — last week protesters shut down proceedings by screaming from the gallery and used social media to debate the legal consequences of rushing the floor. One protester was reportedly arrested after punching a state trooper who was clearing the gallery.

Texas blogger, Adam Cahn was there, and has a report and video from the scene where pro-life women shared their abortion related testimonies, and the pro abort mob responded with repeated chants of "hail Satan."  He notes that they had been chanting those words all day, but it took awhile to catch it on video.
Honestly, I don't think there's a  clearer indication than this report, of who is on the side of the angels in the abortion debate, and who isn't.
***********************************

And, by the way, the only people who go around shouting "HAIL SATAN" in America are the satanists. And they chant this during HUMAN SACRIFICE RITUALS as the victim is cruelly tortured and sacrificed.

So why wouldn't they shout "hail, satan" when standing up for the right to abort children? Aborted babies are tortured and dismembered in the womb, just like victims are in satanic rituals, and ultimately murdered.

One chapter in my previously published book, "SATANISM IN AMERICA TODAY,"  outlines the dark connection between the abortion industry and organized satanism.

"There was never a ritual I participated in, in which we did not have late term fetuses. We got them from the local abortionists. They were desecrated, offered to satan, and cannibalized." C_______, former high level satanist in Ohio

Through years of investigative research, I found the following to be a fact. Many abortionists are, by night, human-sacrificing satanists.

One well known abortionist in Asheville, NC, was known by law enforcement to be a satanic high priest by night. Former satanists admitted to me that many abortionists were in fact satanists by night. What woman wants the intimate parts of her body handled by a child-raping, torturing, human sacrificing satanist in the abortion clinic???

Hated by the Satanists are the Christian pro-lifers! I was a part of the pro-life group in Asheville, NC for many years. The leader, Mick of LIFE ADVOCATES, admitted to me one day that his pro life picketers had experienced QUITE a run-in with Asheville's satanists.

"We were picketing in front of an abortion clinic in Asheville, when about two hundred young people dressed in Satanic black robes and pagan jewelry came up to us with signs, counter-picketing. They looked evil. They were chanting over and over, out loud, "BEHOLD YOUR FUTURE EXECUTIONERS!" Their signs also contained these words. And for two hours they surrounded us and chanted this in strange intonations..."

When I asked Mick if he and the Christians understood what the Satanists were communicating to them, he admitted he did not. (Nor would most Americans understand this either without researching Satanism AND martial law.)

I patiently sat down and explained to him what my research had uncovered regarding both Satanism and FUTURE MARTIAL LAW and the role America's satanists would play in coming Christian persecution.

"Mick, the Satanists of this region were actually being generous to you Christians! They were announcing to you their future intentions for when martial law comes down across this nation."

"For in fact, as they have explained to me personally, they will play a large role in the rounding up of Christians and all other resisters (as defined by our corrupt government) and their subsequent termination under martial law."

"Under martial law, it will be open hunting season for the Christian and Patriot resisters of their Luciferic New World Order..."

There is much more than meets the eye when it comes to the grim world of ABORTION. 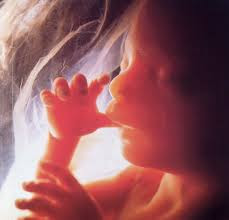 Created in the IMAGE OF GOD

GOD SAVE THE UNBORN CHILDREN OF THE WORLD
FROM THE HORRORS OF DEATH BY ABORTION!