Russian Troops Coming to USA for Joint Military Exercise May 2012

"HA! Stupid Americans! As life WAS in RUSSIA, so SHALL it soon be in...AMERICA!"
-Boast of Russian KGB/FSB spies to alarmed Russian Christians in Spokane, Washington, as reported to me.
By Pamela Rae Schuffert presenting investigative journalism from a Biblically based Christian perspective


WARNING!
READ THE FOLLOWING ARTICLE FROM
THE RUSSIAN TIMES BETWEEN THE LINES....
The future "terrorists" that Russian/foreign and NWO-compromised American troops will be going after are THE AMERICAN FREEDOM FIGHTERS UNDER MARTIAL LAW.
Always remember: One man's "TERRORIST" is another man's "FREEDOM FIGHTER". It simply depends on whose side a person is on, and from whose perspective it is being reported on.


The phony "war on terror" is being used to systematically strip Americans of their freedoms. It will be used to falsely label conscientious and Patriotic Americans fighting for their freedoms in the future under martial law as "terrorists."
THEY ARE NOT.
They are America's true HEROES.
THEY ARE AMERICA'S FREEDOM FIGHTERS
standing for our Constitutional rights and
standing against THE TRUE TERRORISTS,
THE NWO AGENDA COMMUNISTS
behind the martial law/globalist agenda
who threaten our freedoms and
our American heritage. 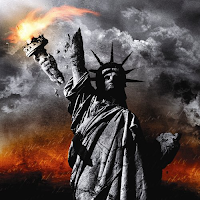 I have long reported on the presence of foreign troops in America. I have warned the American people that the NWO AGENDA USA will use FOREIGN TROOPS EXTENSIVELY UNDER MARTIAL LAW to do the dirty work many US troops may not want to do to Americans.

I have personally interviewed foreign troops in America and Europe as well. German Bundeswehr  military admitted to me and other Americans that they were in America to do the "dirty work" under MARTIAL LAW that American military would not want  to naturally do to their own people. One American military source in Germany admitted this was all true, and informed me it was called "exchange of services."

Also, the NWO COMMUNISTS know that too many US troops are utterly opposed to this traitorous agenda and WILL NOT CARRY IT OUT under martial law USA. Long before this upcoming training exercise, Russian and Ukrainian military have been flown in and have trained in our bases, including MOUT (mock operation urban terrain) EXERCISES to practice taking cities in mock city settings on US bases.

GERMAN TROOPS have been trained in our bases for coming martial law, and are stationed in numerous bases across America for the time they will be used against Americans under martial law. UN/NATO/Partnership for Peace troops will be used also.

This is the kind of news you will never read about in the press. So read the following article with understanding what this is really all about.

In the future you will often witness foreign military including RUSSIAN AND CHINESE TROOPS breaking down doors, seizing weapons, even operating THE GUILLOTINES ON THE AMERICAN PEOPLE UNDER MARTIAL LAW, as well as select elements of our own military. Also, Russian and Chinese troops (among other foreign troops) will be used to combat Americans fighting for liberty under martial law. 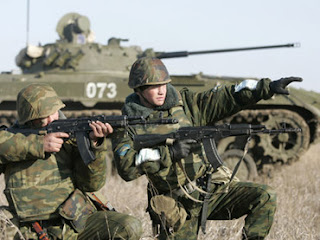 For the first time in history, Russian and American airborne forces will hold joint drills in the US. The anti-terror exercises scheduled for May 2012 will get off to a flying start with a tactical landing operation and “terrorist” camp raid.

­“This is the first time such an event is being held,” Russian Defense Ministry spokesman Col. Aleksandr Kucherenko stressed, announcing the plan. “The Russian airborne will contribute a special task group that will exercise with US special service weapons.”

The drills were arranged by the Russian Airborne Command and a US military delegation in Moscow last December.

Russian soldiers will receive preparatory training in Colorado’s Fort Carson with the US weaponry and equipment they are to use during the operation. The drills include parachuting, operation planning, reconnaissance, assault operations and evacuations by helicopter.

“According to the exercise scenario, soldiers of the two countries will hold a tactical airborne operation, including reconnaissance of an imaginary terrorists' camp and a raid,” Colonel Kucherenko revealed.

The drills will take place between May 24 and 31. But it’s not all work: on May 27, the Russian paratroopers will get a chance to unwind at a baseball game in Colorado Springs.

Posted by Pamela Rae Schuffert at 10:00 AM