The Jewish Plan to Force Christians to DENY JESUS CHRIST ...OR DIE

THE NOAHIDE LAWS AND PLANNED GENOCIDE OF CHRISTIANS
The following is a series of excerpts from a website of Orthodox Jewish Lubavitch Chabad regarding their plans to force their religious belief systems on the non-Jewish world (the 7 Noahide Laws for Gentiles in this case) and important commentaries from Christian Bible Scriptures.

Lubavitch Chabad is the militant Orthodox Jewish organization that is working hard for the fulfillment of  the insidious plan to execute Christians and destroy Christianity worldwide, by the grisly method of DECAPITATION, through forcing the Jewish NOAHIDE LAWS upon non-Jews in America.

They are the ones who presented this legislation in Washington, DC. While many other Jews are working for this agenda, Lubavitch has been especially, due to the urging of their now deceased leader Menachim Schneerson. 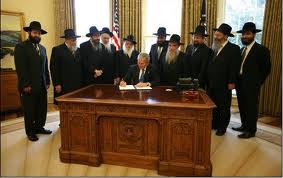 “The U.S. Congress officially recognized the Noahide Laws in legislation that was passed by both houses. Congress and the President of the U. S., George Bush, indicated in Public Law 102-14, 102nd Congress....this Public Law designated March 26, 1991 as Education Day.”

This legislation makes provision for Christians and all other non-Jews in North America to be executed by beheading if they refuse to renounce their personal beliefs and come under a Jewish belief system. For Christians, this means DENYING JESUS CHRIST...or death under the Noahide Laws.

Here is what Jewish law says about this:

Under the Talmud… the worship of Jesus Christ is condemned by Judaism as idolatry. (Enziklopediya Talmud, note 1, pages 351-352) The Talmud also states the penalty for disobedience: ‘One additional element of greater severity is that violation of any one of the seven laws subjects the Noahide to capital punishment by decapitation’ (Sanh. 57A)
Did you see this “by decapitation,” and this is what many of the 71 Kabbalist Sanhedrin today set up believe.
Talmud—Sukkah 52a: “‘With the end of free will, the opportunity to earn reward and enhance one’s portion in the world to come will also cease forever’ ”.

Maimonides Mishnah Torah, in Chapter 10 states: “`’It is a mitzvah (Commandment) however, to eradicate Jewish traitors, minim (Apostates/Traitors), and apikorsim, and to cause them to descend to the pit of destruction, since they cause difficulty to the Jews and sway the people away from God, as did Jesus of Nazareth and his students, and Tzadok, Baithos, and their students. May the name of the wicked rot’”.

The Noahide Laws can be used freely by Jews against Muslims to force them to renounce  Islam, or against Buddhists, Hindus and other world religions that do not conform to their religious belief system under the Noahide Laws.

That includes Islam. I wonder how many Muslims throughout the world will agree to renounce Islam and embrace  the Noahide laws of the Jews or be beheaded by them...?

And now, Jews are instigating yet another plan of persecution and mass genocide of the Christians, this time through their Noahide Laws agenda, designed to force Christians to either renounce their faith in Jesus Christ and become Noahides who are subserviant to the Jews...or suffer horrific beheading under their Noahide Laws.

And it will not stop with Christians.

Enough is enough. This time, it is the Christians' turn, throughout North America (and the rest of the world) to now declare "NEVER AGAIN,"  and to become informed and activated against the ominous plan for worldwide genocide of the Christians (and every other non-Jewish religious group) through planned imposition and enforcement of the Jewish Noahide laws. 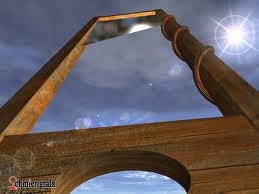 -THE GUILLOTINES TO ENFORCE NOAHIDE LAWS
ARE HERE-﻿
Evidence is repeatedly surfacing of the full intentions of the Jews to enforce their Noahide Laws legislation upon the American people, upon pain of death for non-compliance. In order to behead millions of people including Christians who will never renounce their cherished faith, you must have the tools to do this with.

The ONLY practical tool is THE MODERN GUILLOTINE. And they are HERE. Military and other sources have also confirmed the GUILLOTINES are worldwide as well.

My investigative journalism over the past 15 years has uncovered the shocking reality of modern guillotines being manufactured both overseas and imported into America (initially manufactured in both Japan and China) and now manufactured on US military bases as well, according to one military source, Staff Sergeant Donnie Boysel, training his platoon in Fort Lewis, Washington, in how to operate the modern military guillotines at the time I interviewed him personally.

Truckers across America have frequently confirmed transporting these guillotines by truck across the nation. Last summer, one trucker I met  in a church in western Montana admitted to me that his trucker buddies in Billings, Mt, were bringing truckloads of these modern guillotines. "My trucker buddies have been telling me they are bringing in shipments of GUILLOTINES into Billings, and they are not happy about it..." he admitted after church as we discussed NWO agendas for America. 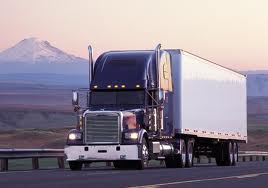 Not happy, because news of this kind travels like wildfire all across America by word of mouth from eye-witnesses, and through the Internet, and through alternative news media. Many people who do research now know about the modern guillotines and their hidden purposes in America, including many of the truckers who frequently ship them across America.

How could truckers be "happy" about delivering modern guillotines when many now know the truth about how they will be used in the coming genocide led by the Jews and their political and military accomplices enforcing their Noahide laws???

Here from a Lubavitch website is their admitted plan for yet another Jewish-instigated revolution, once again guaranteed to bring suffering and death to countless millions (as in the Jewish Bolshevik communist revolution...)THIS time to force their Noahide laws genocide agenda  upon North America...AND SOMEDAY THE ENTIRE WORLD.
-Pamela Rae Schuffert

"all other religions will disappear..." refers also TO CHRISTIANITY . How will these Jews make "Christianity disappear?" Especially when untold MILLIONS of Christians worldwide KNOW that Jesus is in fact the Messiah and their Savior as well, and have no intentions of renouncing Him to become Noahides instead? Simple.

The modern military guillotines to enforce the Noahide laws are now  found throughout the USA and in fact are now confirmed by CIA and military sources to be worldwide.
As I have reported for many years now, THE GUILLOTINES ARE HERE, and have been for several decades now. Mass genocide of Christians worldwide is planned by the Jews against Christians and all other Gentiles who will not submit to distinctly Jewish Noahide Laws.

These are the same Jews from whence originated bloody COMMUNISM that has destroyed tens of millions of Christians in every nation that has fallen to Communism. Christians continue to suffer and die under Communism in these nations.
The earth groans under the magnitude of innocent blood shed because of Jewish instigators and justifiers of such religious bigotry-based genocides against Christianity and non-Jews as well.
And now, the Jews will use the NOAHIDE LAWS and the modern military guillotines to continue the mass worldwide genocide of Christians and all other Gentiles who will refuse to renounce their faith AND BECOME SUBSERVIANT TO JEWS AND BECOME NOAHIDES.-Pamela Rae Schuffert

************************************************﻿
Lubavitch report continues:
Judaism has always been a conquering religion, not for the purpose of converting gentiles to become Jews, but rather with the mission of returning the world to the universal covenant between G-d and Noah. For halachic reasons too numerous and detailed to list here, gentiles today who follow Christianity, Islam, or other religions are not, for the most part, "righteous gentiles" who inherit the World to Come.

That status belongs only to those gentiles who carefully observe the Seven Laws of Noah, including following the halachic authority of the oral Torah and the rabbis.

...Although causing the gentiles to observe the Seven Noachide Laws is itself one of the 613 mitzvos of the Torah.....
...... And as the Lubavitcher Rebbe has explained, by transforming the gentiles we can quickly create a vast army of supporters who will help us reveal Moshiach and bring all Jews back to the Torah. Specifically, the Rebbe has emphasized that the "peace process" in Israel will be defeated only through our influence on the gentiles—especially through the campaign to teach the Noachide Laws (see Sichos in English, vol. 16, [19 Kislev 5743])....
...Our most pressing task, to put it simply, is to launch

an international Noachide revolution
without delay. The process has already begun, with dozens of tiny Noachide communities having appeared throughout the United States, generally composed of former Christians who have abandoned that religion.

The task of organizing
THE REVOLUTION
can be divided into two broad stages:

I) We must first create a new Noachide society as an international network of communities and organizations functioning inside, but separately from, the surrounding society (based on halachic requirements and directives, Noachide institutions function quite differently from their Christian and secular counterparts).

This starts with an aggressive outreach program, by Jews and Noachides alike, to teach gentiles about their responsibilities according to Torah.

Simultaneously, we must organize functioning programs and institutions that are prepared to absorb these vast numbers of ex-Christians and immediately involve them in efforts to bring Moshiach.......

2) In the second stage, the growing Noachide movement will seize political power in the capitals
of the Western nations.
This, of course, will not take place until the Noachide society has grown to some threshold size. We do not know how large this needs to be nor which nations will join the revolution first, although the United States, as a fairly religious, conservative nation, certainly tops the list of prospects.