Warning to My Russian Christian Readers in USA 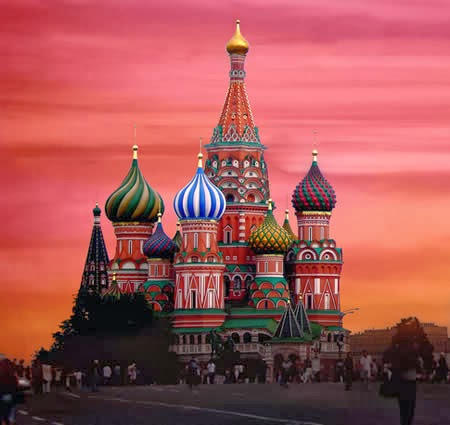 For those of you Slavic Christians who have followed my reports for many years, you know of my deep Christian love for the Slavic peoples. The love of God knows no political or national boundaries. Jesus Christ died for all mankind of every nation. I have worked with Slavic Christians for years, and attended many Slavic churches across America. I sing your great hymns, I pray for your people, and I love you. 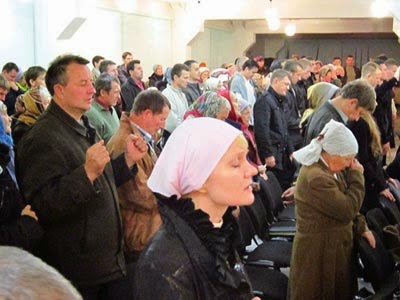 Yes, there are many Russian and Ukrainian Christians living in America now. I have visited your homes and prayed in your churches and enjoyed your fellowship. We are one in Christ Jesus our Savior. And that is why I am writing this report of grave warning for your safety and well being at this time.

When the Japanese bombed Pearl Harbor in WWII, the Japanese people living in America were singled out and forced out of their homes to be taken to detention camps where they were imprisoned.

If war should actually break out, or tensions escalate between America and Russia, I fear the same thing could happen to Russian/Slavic people living in America. This would affect the Russian Christian living in North America as well.

As the increasing signs of  war appear daily now in news broadcasts from the Crimea and the Ukraine, and Russia's intentions to invade the Ukraine (which has already happened now) become clear, war between Russia and the West, including America, is now a very real possibility. We are already  in a war with words between Putin and Obama at this time. 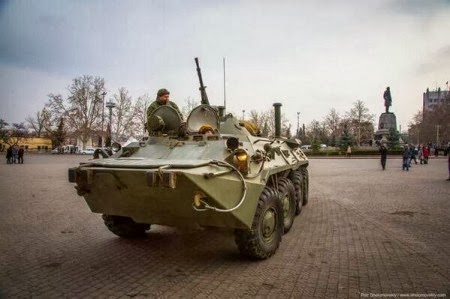 Personally, I believe leadership in America has acted foolishly in this entire event, and is now recklessly endangering the entire world, as America provokes Putin by her actions in the Ukraine at this time.

It is now a known  fact that America helped to instigate the recent revolt in the Ukraine, and financially funded the opposition forces in the Ukraine which overthrew the former leadership. Of course, the EU  supported this as well. Vladimir Putin is fully aware of this, and Russian anger against America and the EU is high at this time for this reason. 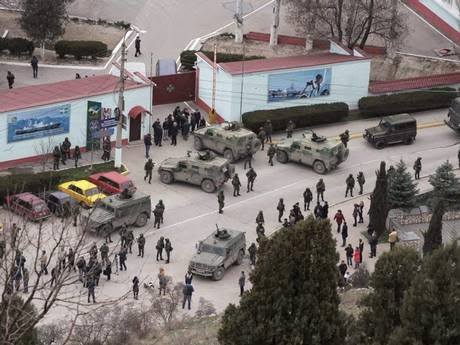 Bilateral treaties between the USA and the Ukraine have been made previously, that call for America to intervene should the Ukraine be threatened by military danger. If America were to militarily intervene, countering Putin and Russia, this could potentially lead to war on a major scale, including thermonuclear confrontation. The possibilities are endless.

Therefore, I fear greatly for the safety and well-being of my fellow Americans and Christians in America at this volatile time. 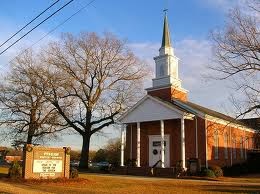 However, I also fear for the safety of Russian and Slavic Christians living in America as well.

You came to America for religious freedom from Communist oppression in the former Soviet Union. Some of you have relatives who suffered and died in the gulags under Communism. 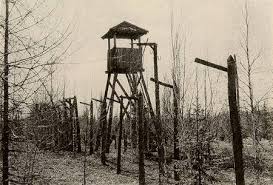 You came here for safety and freedom from oppression. You came to America to worship God in freedom and peace. But now, that freedom and peace may be rapidly disappearing as events unfold in Russia and the Ukraine, and America finds itself trapped in the middle of escalating conflicts.

My great concern for Slavic Christians is, that IF indeed America is going to war against Russia over the Ukraine issue, and IF Russia also declares war against America, that Russian Christians throughout North America may be rounded up ( just as Japanese were during WW II,) and sent to the FEMA detention camps during this time...even though they are innocent of any wrongdoing and their only "crime" is to be "Russian".

Also, Americans have become aware through alternative news media, that many Russian military troops (SPETSNAZ) have been brought into America to someday fight against and kill Americans who will offer resistance against the planned future globalist takeover of this nation. 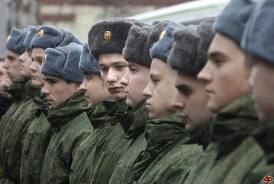 And of course, aware Americans will fight back against this attack on their sovereignty and liberties, and they will someday fight for freedom and also combat these deadly Russian SPETSNAZ troops in America under martial law.

The problem here is, Americans do not KNOW who are the peaceful Russian/Slavic Christians or dissidents here for religious freedom, and which Russians are planted here for martial law and to attack the Americans someday. 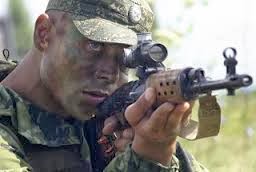 And for the Russian Christians, here for peaceful purposes, this poses a distinct threat to their safety and well-being in America's future. And as a fellow Christian, I am concerned for your well-being.

Danger to the Russian/Slavic Christians in America is compounded now what what is unfolding in the Ukraine/Crimea, as America attempts to intervene and finds itself confronting Putin and his military forces. Can this lead to war ultimately between the USA and Russia someday? The very real potential is there. 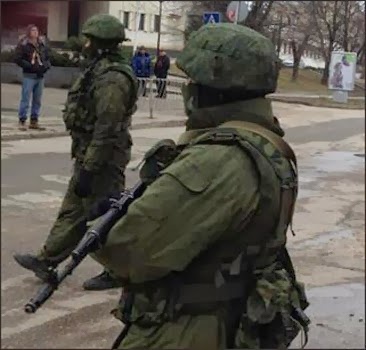 Tensions may increase between the American people and the Russian/Slavic immigrants as a result. The potential for innocent people to be caught in the crossfire and to come under attack in America is extremely high.

As in every conflict and war, the innocent people are always caught in the crossfire as two opposing sides battle one another. And sadly, that always seem to include THE CHRISTIANS. Look at what has happened already to the Christians in Egypt and Syria during times of war and confrontation.

Here in America, it is the intent of the anti-Christian, anti-Constitutional globalists (or, the NEW WORLD ORDER) to seize control of this nation, abolish all her freedoms, and to permanently eliminate all patriotic, Constitutional and Christian opposition to America's loss of sovereignty and future freedoms.

They have brought foreign troops to America, to help persecute, arrest and fire upon the patriotic Americans who will  never allow this nation to become globalized under their satanic agenda. 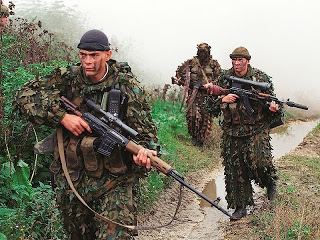 And this is WHY Russian SPETSNAZ snipers and OTHER foreign troops are here in America today.

The traitorous NWO elements, that have infiltrated and corrupted the US government, plan to use foreign troops to do what many American military are not willing to do: fire upon and kill the American protesters and freedom fighters under martial law.

My readers know that I have written about the concealed purpose of the foreign troops here in America under martial law for many years now.

Just as the Siberian gulags were established in Russia and the former Soviet Union, to imprison and ultimately terminate all resisters to communism (Christians and political dissidents especially), so America today has numerous FEMA and DHS detention camps for the sole purpose of removing from our society all who will not cooperate with the NWO globalist agenda. 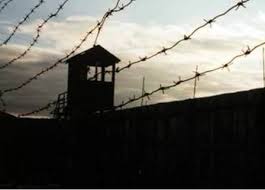 And just as Christian and political "refusniki" were removed by prisoner trains to the gulags, so America secretly has thousands of prisoner trains (boxcars with shackles) to remove millions of innocent Americans to THE AMERICAN GULAG SYSTEM...just like Russian and the USSR under communism, beginning with the Bolshevik revolution. 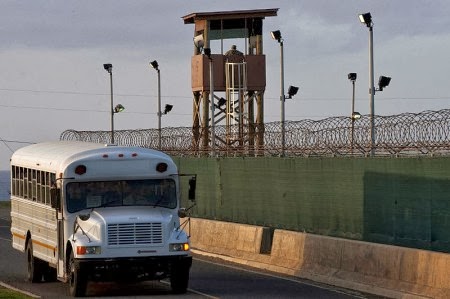 Russian and Slavic Christians, please pray for your protection and safety and well-being in the times we now encounter in America.

Pray for wisdom and guidance from  Almighty God throughout your churches. Pray that this conflict does not turn into WW III, and outright thermonuclear war between Russia and North America. Pray for peace between Russia and the Ukraine. American Christians are praying with you and for you as well.

Many of you Slavic Christians have told me that God's Holy Spirit revealed that there would come a day when you must leave America for safety. Personally, I believe that this time may be NOW.

The same God that led Slavic Christians to America for freedom and safety, may soon lead them OUT of North America and Canada for safety and religious freedom again. 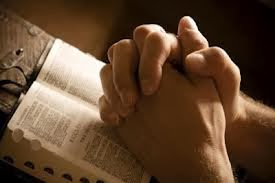 Please, beloved brothers and sisters in Christ, fast and pray about this now.

Let us all pray mutually for one another as Christians united in our faith, American and Slavic Christians alike.

Let us pray for peace especially, and for God's great hands of mercy to restrain the madness of wicked men intent on pursuing their greedy goals at the expense of millions of endangered lives and futures. 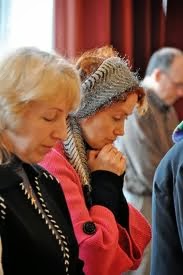 Let us pray against the future possibility of war on a major scale at this time.

Let us also pray fervently against the future persecution planned against Christian in North America under MARTIAL LAW.

No true Christian ever wants bloodshed and violence and death to come to their nation, whether in Russia or the Ukraine or here in America.

As Christians, we all know the Bible verse, "Blessed are the peacemakers, for they shall be called the children of God." May God use our heartfelt prayers and intercession at this time around the globe to HALT the insanity of more war in the world today...especially this present conflict that can lead to thermonuclear war and WW III.

My Slavic Christian friends, seek God NOW for wisdom and direction, and OBEY God's leading if He tells you to leave North America/Canada while you can, safely. And may God be with us all.

http://beforeitsnews.com/alternative/2014/03/warning-to-russian-christians-living-in-usa-2910042.html
Posted by Pamela Rae Schuffert at 11:03 AM