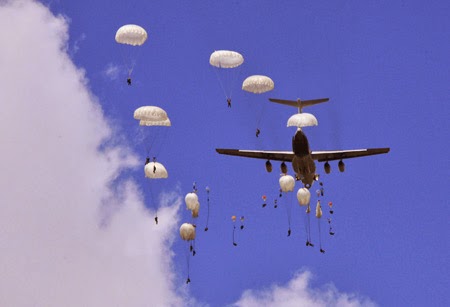 AS RUSSIAN MILITARY MANEUVERS
ESCALATE IN THE UKRAINE,
WHAT CAN THIS MEAN FOR AMERICA...
AND THE WORLD???


The following article comes from Ukrainian information sources (translated). (I had to make a few corrections in the original translation errors in this article: mechanical online translating does not always get everything correct.)This military event is going on even as you read this.

I cannot stress enough the seriousness of what is happening in the Ukraine today, and the deadly dangers to the North American people as a consequence of blatant US involvement in the destabilization of the Ukraine and instituting puppets and pawns for American/EU/NATO hegemony in that region of the world.

Even now, Russians are withdrawing billions of dollars from western banks after Obama signed an order stating that the US could seize Russian assets or freeze them at this time. This can have severe consequences in the world of banking and our economy, right here in America.

Russia is fully aware of the United States' role in this effort of western powers to take over the Ukraine and displace Russian's influence. Our naval ships are now in that region, we have military aircraft in that region plus drones, and now evidence of false flag attacks to be staged in the Ukraine apparently to justify NATO/US military involvement in that region has also emerged.

What kind of military threat does this pose to the USA?

China has powerful military forces and is allied with Russia against what the western powers are seeking to do in the Ukraine. Many alternative journalists are also deeply concerned, as I am, and the term "WW III" is increasing being used in articles addressing this present conflict surrounding the Ukraine.

Of course, the mainstream media puppets of the Obama regime and the corporate/bankster shadow government could care less about the lives and safety of millions of endangered Americans. They are sounding no alarm for the potential of attack and  nuclear strikes on American soil, or EMP dangers from Russia and China.

One of their excuses is, they don't want widespread panic to occur which would effect the economy. As Bill Clinton once said, "It's the ECONOMY, stupid!"

The main reason however is, they WANT Americans to be caught off guard and DIE. The us government has pushed MONSANTO seeds of death nationwide. Forced vaccinations filled with deadly toxins are forced upon our children.

The deadly war of the American government against her people takes place every single day. Americans are being sickened and killed with impunity every single day by such deliberate methods, and no one is holding these government/military murderers accountable or bringing them to justice. We have become A VICTIM NATION. And perhaps hastening to become A TERMINAL GENERATION.

Dead Americans and dead Christians are always a part of the NWO agenda for America. And as long as the ruling elite of this nation have their underground nuclear fallout bunkers and military bases and tunnels to escape safely into, they could care less about our well being and safety.

Americans need to be thankful for the role that  ALTERNATIVE NEWS JOURNALISM  plays in keeping Americans informed...and the rest of the world as well so they too can know the truth.

Well friends and readers, looks like the CONSPIRACY CROWD  and THE PREPPER MOVEMENT were right after all. I recommend two major responses to all this:

1- Make sure you are right with God. Receive forgiveness of your sins and eternal salvation NOW, because you do not know what the future may bring. Once you di, there is NO SECOND CHANCE.

2-Become a PREPPER ON STEROIDS NOW. Search the web for those survival website and prepper supplies, and get YOUR supplies while they are still available. If things should begin to rapidly deteriorate in America and overseas, discover where you can purchase all your supplies locally, because mail may be cut off eventually should crisis come to our nation.

Update:
The Ukrainian Foreign Ministry expresses its decisive and categorical protest in connection with the landing on 15 March 2014 in the district of the settlement of Strelkovo of Kherson Region, of a platoon of soldiers from the Russian Federation Armed Forces, numbering 80 persons, and the seizure by them of the settlement of Strelkovo, with the support of 4 combat helicopters and 3 combat armored vehicles.

The Foreign Ministry demands that Russia immediately withdraw its armed forces from the territory of Ukraine.

Ukraine reserves the right to take all necessary measures to end the military invasion by Russia.

UNIAN was informed about this by the locals. Also, this information was confirmed by law enforcement sources in the Henichesk region.

Residents of Strelkovo reported that in the past days, the Russian military helicopters circled the area several times around their village.

Why paratroopers landed and what is happening now in Strelkovo is still unknown.

Note, in the sea, a few kilometers from the Russian military sharpshooters are gas producing platforms NAC “Chernomorneftegaz.”-End of article

Mort's comment:Looks to me like Russian troops are seeing how much territory they can take without firing a shot.

Posted by Pamela Rae Schuffert at 10:57 AM