AND NOW, TIME FOR A TRUE-LIFE STORY,
A STORY WITH A MORAL BEHIND IT. 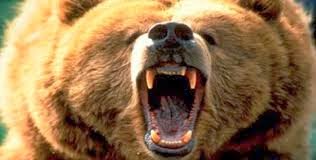 NEVER KICK A BEAR IN THE BACKSIDE....
UNLESS YOU ARE READY TO FACE THE DIRE CONSEQUENCES! 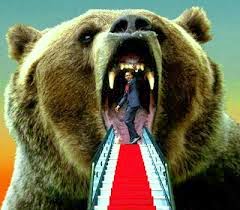 AND THAT ESPECIALLY GOES
FOR A RUSSIAN BEAR....
www.AmericanHolocaustComing.blogspot.com

In the summer of 2006, I worked in a well known national park, Yellowstone NP, known for it's large bear population. I worked for a while in the campgrounds. Our instructors taught us many things, emphasizing also the dangers of dealing with the bears at this park.

We were taught to constantly instruct the people camping on how to properly store their food and coolers in their hard-shell campers or trailers or vehicles, and never out where the odors could attract bears and invite danger. So often, we park workers noted the incredible naivete and downright stupidity of so many campers from across the United States.

So many were, as they say, "city slickers." They had no concept of how thing operate in the wild, and that includes wild animals such as the bears. At least once a day, careless park visitors had to be airlifted out by the MEDIVAC chopper to a local hospital, because of dumb things that tourists do in the national parks.

For example, one woman had to be MEDIVAC'ed out because of doing something ridiculously dangerous.She decided to perform her ballerina dance in front of a buffalo close by, as her husband filmed it.

Well, as the souvenir store worker told me, the buffalo somehow was not impressed. And to show his distaste for the ballerina performance, the buffalo decided to charge and toss the poor woman! She later spent 6 weeks in the hospital, many of them in ICU, just for one foolish mistake in the national park.

Bear attacks occurred as well, because of stupid tourists doing stupid things. They forget that a national park in the wild is NOT another "Disneyland" wherein audio-animatronic wildlife kick into action as the ride slowly goes by. The lions and bears are all quite tame and controlled completely by the park. They are programmed to be harmless.

On the other hand, the wildlife in our national parks like Yellowstone NP are NOT tame and can NOT be controlled by park rangers or human authorities. And they can be dangerous to human life and safety, especially when provoked. Bears can attack humans whether provoked, or not.

And today, America faces another bear most deadly. This bear has a history of devouring much flesh...human flesh. Tens of millions of human lives have been devoured by the insatiable Russian bear and her offspring throughout the past one hundred years. 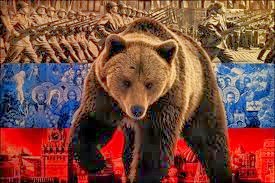 History proves that this bear is deadly, no matter how cuddly and friendly it may appear to be at various times. Never trust a bear fully.

Clearly, this is one  big bad bear that you do not deliberately aggravate or anger. Bears become further infuriated when robbed of their cubs. Just think of the Ukraine somewhat as a Russian "cub" in the sight of the Russia bear. Then you will understand why this bear is so angry at this time with the foreign powers meddling in their affairs.

NO matter how friendly and cordial a bear performing for the public may be, underneath it always remains dangerous, able to revert to it's wild and natural behavior at whim.

Therefore, people are wise to never provoke a bear to anger for any reason. That bear has teeth and claws and is capable of shredding it's human adversaries and then devouring them. People are wise to avoid conflict that can lead to attacks by bears.

And right now, a very BIG bear armed with formidable claws and teeth is being provoked and angered, and feels it is being robbed of one of it's "cubs." And woe unto whoever provokes that big bad bear, and then finds themselves under ATTACK.

Unfortunately, the provokers just might find themselves ending up in the belly of a bear someday....so might we all. 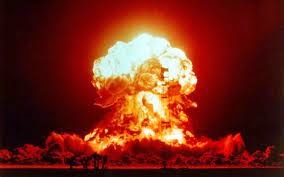 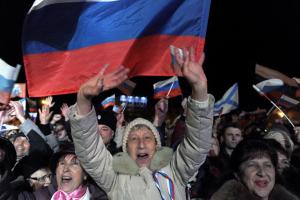 Pro-Russian Crimeans celebrate in Sevastopol on March 16, 2014 after preliminary results (AFP Photo/ …
Kiselyov made the comment to support his argument that the United States and President Barack Obama were living in fear of Russia led by President Vladimir Putin amid the Ukraine crisis.
His programme was broadcast as the first exit polls were being published showing an overwhelming majority of Crimeans voting to leave Ukraine and join Russia.
He stood in his studio in front of a gigantic image of a mushroom cloud produced after a nuclear attack, with the words "into radioactive ash".
CLICK HERE FOR MORE AND VIDEOS.