The CONFIRMED AMTRAK DEATHCAMP of Beech Grove IN

Throughout my years of investigating and reporting on the NWO agenda, much controversy has centered around what was an AMTRAK REPAIR FACILITY located outside of Indianapolis, IN, in Beech Grove.

This facility was used for many years, then was closed and lay idle and vacant for several years. And then, strange rebuilding activities began.

Linda Thompson of THE AMERICAN JUSTICE FEDERATION had previously expressed her suspicions about it being refurbished to provide yet another location for the future termination of NWO resisters under coming martial law. YOUTUBE has her video posted, in fact.

But also you will find many government DISINFORMATION posts as well on YOU TUBE, attempting to disprove and ridicule this.

The US government is continually spending millions of dollars annually in their efforts to continue to brainwash the American people, especially denying the NWO agenda even exists.

They often use COINTELPRO, government misinformation specialists for such deceptive operations. Investigative journalists like myself are constantly battling such deliberate government disinformation, in the quest to TELL THE AMERICAN PEOPLE THE TRUTH in this critical hour.

Later, my friend AL Cuppett, former NWO exposer from Pentagon background, visited this facility, and left feeling it was indeed being set up for a future termination facility under martial law. He wrote extensively about this former AMTRAK facility.

While I was in Jerusalem, Israel, during FEAST OF TABERNACLES one year to lecture and investigate, I met one night with a CIA link, Michael, a Messianic Jew from Tulsa.

While standing in Ben Yehuda Square, we discussed the COMING NWO AMERICAN HOLOCAUST. I asked Michael if he knew about the AMTRAK DEATHCAMP in BEECH GROVE, IN. Michael replied, 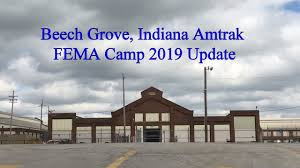 "I know all about it. My CIA contact G_______comes over to our house to talk about this all the time. He told us that UNDER MARTIAL LAW, this facility will TERMINATE 26,000 RELIGIOUS and POLITICAL PRISONERS every 24 hours...."

Many other former CIA have personally revealed to me NWO AGENDA activities directly linked to the notorious CIA.

Michael Maholy, Steve Campbell, Dave, Elaine, Larry Wayne Harris, and many more were ALL former CIA operatives. ALL testified to the painful reality of the role the CIA plays and will play in bringing Americans down into the iron jaws of death of the NWO.

If anyone should know about the NWO agenda, it is of course the CIA. The OSS/CIA remains a distinctly NAZI CREATION, beginning with the WANNSEE CONFERENCE outside Berlin, of high level Nazi officials meeting to determine the destiny of the NWO.

They decided that IF the NWO AGENDA FOR THE WORLD FAILED THROUGH NAZI GERMANY AND HITLER, they would transplant the ENTIRE NWO AGENDA to America...and they did.

BUSH SR (real nameGeorge Scherff Jr.,who has been more recently exposed through a series of reports and damning Nazi photographs as a foreign German transplant at the age of 16, clandestinely brought into America through the CIA'S "OPERATION PAPERCLIP,")used the CIA intensely to advance their cherished Nazi NWO agenda.

Former CIA admitted to me that CIA sit around discussing how to bring down the NWO in America all the time in CIA surroundings.

The CIA helps design the very FEMA/HOMELAND SECURITY camps that will be used to persecute and terminate all future NWO resisters.

SATANISM is a major pillar of many of the CIA black ops activities, and satanism/Illuminism is THE BACKBONE OF THE NWO.

Although parts of the AMTRAK repair facility are allegedly used for "repair", the fact remains that several HUGE repair buildings have been retrofitted to be used as GASSING facilities under martial law.

These huge train repair buildings that can hold 4 train engine/boxcars at one time, have been sealed up and made airtight.

PRISONER TURNSTYLE entrances have been created. FOUR ROWS of barbed wire fencing have been installed around this facility for security.

In order to use this AMTRAK facility as a DEATHCAMP for future NWO resisters, ALL THEY HAVE TO DO is simply back in four FOUR PRISONER BOXCARS WITH SHACKLES into one former repair building, SEAL IT UP, and release the deadly gas into the building. And within 20 seconds, PRISONERS WILL BEGIN TO DIE, according to former CIA microbiologist Larry Wayne Harris.

When I interviewed my friend, former CIA assassin Elaine (later becoming a Christian exposing satanism and the NWO agenda), about this facility, she confirmed that this will be used as a FUTURE DEATHCAMP to get RID of anticipated NWO resistance.Elaine should KNOW. She WAS the previous satanic high priestess over Indiana for 17 ruthless years, when hired for the CIA as an assassin.

Elaine sat around in CIA circles discussing with others "How the heck DO YOU TERMINATE the Christians who stand in the way of our NEW WORLD ORDER?"

She admitted to me that they came up with the concept of the very concentration /detention camps I have been exposing for 13 years now.

"And although I greatly regret my role in these camps, they stand to this very day, and they will be used for termination of NWO resisters in the future..." Elaine told me.

I have performed several live broadcasts from Beech Grove, Indiana, across from this facility. I also discovered an ominous fact about the people in Beech Grove, IN.

When asked about the AMTRAK repair facility, they often matter-of-factly reply,

"Oh, that's to KILL THE CHRISTIANS under martial law...."

Elaine, former high priestess over Indiana, told me how rampant SATANISM is throughout Indiana, and how ALL the satanists KNOW the THE NEW WORLD ORDER is frankly SATAN'S KINGDOM MANIFEST ON EARTH.

"Satan is the father of the NWO, and the satanists are the backbone, " Elaine explained to me. And the Bible, in Revelation 13, tells us this very thing as well.

Throughout years of research to investigate and expose the NWO agenda, I know the following: there is not a SATANIST/ILLUMINATI worth their title, who does NOT know all about everything I uncover regarding the NWO agenda for America, and their dark plan to murder millions of innocent victims in their FEMA/Homeland Security deathcamps under MARTIAL LAW.

In fact, as Elaine and others have admitted, they CAN'T WAIT for the NWO AGENDA to BEGIN. And sadly, they can't wait to round up and KILL THE CHRISTIANS IN THE CAMPS.

From the heart of the CIA NWO planning sessions, they admitted that their NUMBER ONE ENEMY of the the NWO agenda WERE THE CHRISTIANS. They knew that NO Bible-believing Christian could ever abandon their faith, to jump on board their Satan-based NWO agenda. And hence, they determined that THE CHRISTIANS HAVE TO GO...to the CAMPS, that is.TERMINATION, Communist Bolshevik gulag style, complete with brutal rape, torture and death for the CHRISTIANS.

How perfectly this all lines up with Bible Prophecy pertaining to the END TIMES. Revelation 13 in the Bible tells it all about this coming antichrist world globalist tyranny that will have the power to put Christians to death, and whose power is directly derived from SATAN HIMSELF. And we are now living IN THIS TIME PERIOD ON THE EARTH.

Well, my fellow Christians, can you stand up to the test we all will face in America in the future? Is Jesus in fact worth LIVING for, and is He also worth DYING FOR? We love to serve a "bless me God," but can we also EMBRACE THE CROSS when the prophesied times of testing and persecution come? Decide now. Your eternal soul and eternal destiny is at stake.

I beseech you, my fellow Christians, to use this grace time we have left in America to SEEK GOD for the strength and grace to face the COMING TIMES OF PERSECUTION, SUFFERING AND MARTYRDOM that Christians in America (and soon worldwide) will face under the world globalist antichrist system of REVELATION 13. Choose to confess and forsake any compromise and hidden sins in your life also. His greatest grace and power to overcome will be given to those who are truly committed and faithful to God, and who walk and holy and upright walk with Jesus Christ COVERED WITH HIS BLOOD.

Seek God to be filled and empowered with His Divine Holy Spirit. Apart from a power far above our own weak physical capabilities, we cannot possibly stand against this NWO darkness. BUT COUPLED with faith in the LIVING GOD of ALL might and power, through faith in His Son the LORD JESUS CHRIST, we CAN and SHALL overcome.

"And they overcame him[satan] by the BLOOD OF THE LAMB, by the WORD OF THEIR TESTIMONY, and because they LOVED NOT THEIR LIVES unto the DEATH." Revelation 12:11
Posted by Pamela Rae Schuffert at 7:20 AM