Is THIS PROJECT HAARP or COMING JUDGMENT to the Nation's Capitol and BEYOND???
"In Virginia, two reactors at the North Anna Nuclear Power Station in Louisa County, Va. shut off automatically after the earthquake. The plant is located less than 10 miles from the epicenter of the earthquake.The plant, owned by Dominion Virginia Power, is being run off four emergency diesel generators supplying power for critical safety equipment."
Is this following the pattern of HAARP triggering the Japan earthquake and the nuclear reactors disaster...and for a NWO agenda??? 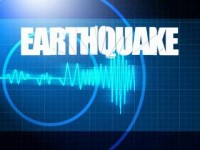 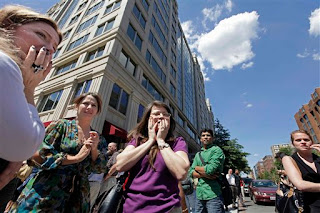 A major earthquake struck the D.C. area on Tuesday afternoon, striking fear in residents and forcing the evacuation of government buildings, including the White House, Pentagon and Capitol, and shaking homes and structures up and down the East Coast.

The 1:51 p.m. quake, measured at 5.8 magnitude and centered in Mineral, Va., was felt from Atlanta to New England, and as far west as Ohio and Michigan, according to reports. It even reached Martha’s Vineyard, where President Barack Obama is vacationing.

The earthquake damaged two Washington landmarks. Three of the four towers atop the National Cathedral were damaged. A statement on the Cathedral’s site said: “The historic Washington National Cathedral sustained substantial damage in this quake. Experts are tirelessly working to assess the building damage—both structurally and aesthetically.”

Later Tuesday, it was reported that engineers had found a crack near the top of the 91,000-ton Washington Monument, presumably caused by the earthquake. It will remain closed indefinitely.

Obama led a conference call at 2:50 p.m. with senior administration officials and was given an update on the status of critical infrastructure, according to White House spokesman Josh Earnest.

“The president was told that there are no initial reports of major infrastructure damage, including at airports and nuclear facilities and that there were currently no requests for assistance,” Earnest said. “The president asked for regular updates on the situation.”

Obama did not feel the earthquake, Earnest said later on Tuesday.

An aftershock measured at 2.8 struck at the epicenter at 2:46 Eastern time.

The Capitol was re-opened shortly before 5 p.m.

The D.C. Fire Department reported several minor injuries, though none serious, according to The Associated Press.

“I was in Pakistan back in 2005 when an earthquake there killed something like 80,000 people,” said one State Department official outside the evacuated Foggy Bottom headquarters. “When you’re sitting deep inside one of these huge government buildings, it doesn’t take too much shaking and rolling to bring back a lot of very unwelcome memories. … It’s so unexpected here in D.C. … I think I was probably just as shaken up.”

On Capitol Hill, crowds of employees, aides, tourists and others lined the nearby sidewalks as police closed down the major streets near the Capitol, which was evacuated after the incident.

Originally scheduled for a meeting at 2:30pm, the Senate instead held a brief meeting an hour later at an off-site location for the first time since the 9/11 terrorist attacks. While lawmakers are out of town, the Senate is technically in session because of a procedural dispute over formally going into recess.


Coons told reporters afterward that the Architect of the Capitol and the fire marshal were conducting an assessment of the structural integrity of the historic building. The Capitol Police had evacuated the building, requesting that only one staffer from each office should be in the building to secure their office spaces.-End
**********************************
August 23, 2011 - The U.S. Geological Survey is reporting a 5.8 magnitude earthquake that hit about 100 miles south of Washington D.C. at 1:51 p.m. and was felt as far north as Boston, according to the Associated Press.

People evacuated buildings at 17th and DeSales streets NW after the 5.8 temblor shook the region.

The U.S. Geological Survey reported an aftershock at 2:43 p.m., a magnitude 2.8 event roughly five miles from Mineral, Va., which was the center of the first earthquake.

Buildings throughout D.C. were evacuated on an ad hoc basis, including the Pentagon, the Capitol building and the State Department.

The quake lasted about 30 to 40 seconds, according to a report from NBC4. It's one of the largest to ever hit the region; the USGS has an earthquake on record in Virginia from 1897 that registered 5.9 on the Richter scale.

Operations at area airports were briefly affected: 34 flights were delayed at Ronald Reagan National Airport for nearly an hour, but operations had resumed to normal by 3 p.m.

Authorities were scrambling to ensure that nothing had happened to any of the aircraft when the quake hit, according to WAMU's Armando Trull.

Metro trains were running at 15 mph after the quake, but Metro officials told WAMU transportation reporter Jim Hilgen that there was no damage to any of the Metro lines.

Amtrak trains are still delayed up and down the East Coast as officials continue checking trains and tracks between Washington and Baltimore.

There are various reports of building damage throughout the area, including at the National Cathedral. A cathedral spokesperson confirmed to the Washington Business Journal that three pinnacles on the central tower have broken off.

D.C. Fire and EMS spokesman Pete Piringer told the Associated Press that numerous other buildings have been damaged, including the Ecuadorian embassy and a handful of schools. Piringer says all city fire trucks and ambulances have been deployed. Those that aren't responding to calls are driving around and looking for structural damage, injured people and other emergencies, he tells AP.

In Virginia, two reactors at the North Anna Nuclear Power Station in Louisa County, Va. shut off automatically after the earthquake. The plant is located less than 10 miles from the epicenter of the earthquake.

Nuclear Regulatory Commission spokesman Roger Hannah tells the Associated Press the agency was not immediately aware of any damage at nuclear power plants in the southeast. The NRC and Dominion are sending people to inspect the site.

The Smithsonian closed all its buildings after the earthquake, noting that the main concern among its facilities is the Smithsonian Castle, according to the Associated Press.

There are some minor cracks and broken glass in the castle, Smithsonian Secretary Wayne Clough tells the AP. The gothic, red-brick castle was built in 1857.

The Smithsonian closures include the National Zoo.