I Held The CROSS Up To OBAMA As He Passed By...

The Sunday
That
OBAMA Visited BILLY GRAHAM
In
MONTREAT,NC 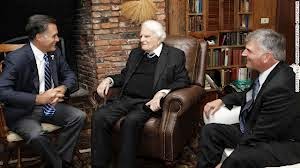 This visit of OBAMA to Montreat, NC, came as a total surprise to many last Sunday. I awakened that morning to prepare to attend another wonderful sermon in Christ Community Church, (EPC) hosted by personal friend and fellow Believer, Richard White.

Richard and his wife have been wonderful friends throughout the past twenty years, and I was very proud of Richard and the committed members of this congregation, when they decided to withdraw from the very liberal PCUSA and join instead the Biblical sound EPC instead, adhering to the word of God.

But no one told me Obama would be visiting the Presbyterian retreat grounds of Montreat, to visit the Rev. Billy Graham, until I arrived at church that morning.

Instantly, I realized that I had to be standing in that crowd inside the gate when his Presidential motorcade slowly passed by en route to the Grahams' home.

Many others had also decided to stand there by the road, cordoned off by security and police for his visit. Some even brought American flags to wave as he passed by. Others prepared to wave enthusiastically. Children standing by me appeared very excited as they passed bags of pretzels and crackers to munch as they waited patiently for the entourage to appear. The atmosphere was in fact quite festive.

But my heart was feeling subdued within. Yes, I am a Christian who faithfully prays for Obama and our government as well. But because of years of investigative research, I now see the world through different eyes, the eyes of truth and understanding that goes BEYOND the obvious and beyond news media bias and blackout.

I meditated on all my research, and that of other discerning reporters had uncovered, about where my nation and my fellow Americans are being taken by this government determined to bring America into the NEW WORLD ORDER, or world globalism and the NAU. 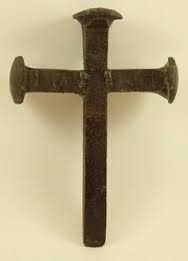 Glancing at the flags many were preparing to wave as the President passed by, I then looked down at the heavy cross around my neck that morning, forged of old railroad spikes cut and welded together, suspended on a leather cord around my neck.

This Cross was created in honor of America's future martyrs of the Christian faith, who would someday take their final journey, in prisoner boxcars with shackles, across America by railroad, to the more than 800 FEMA/HOMELAND SECURITY detention camps prepared to detain and ultimately terminate the future "resisters of the NWO," as my former CIA and military sources revealed to me so many years ago.

They emphasized to me repeatedly that Christians would become a major target for arrest and removal to the camps in the future, even as Christians were also targeted and removed to camps under communism in many other nations as well.

My many years of research across America confirmed the grim reality of the camps they are setting up across our nation. I have followed the railroad tracks across this country, to research and document the presence of the prisoner boxcars and shackles being prepositioned throughout the continent, ready for the hour of martial law and their tragic purpose for which they were created, under secret contracts by the US government with various companies such as GUNDERSON INC.

Some eye-witnesses even mentioned the disturbing presence of what appeared to be MODERN GUILLOTINES, bolted inside every prisoner boxcar. (I have written many articles throughout the years confirming the presence of modern military guillotines in America today, and their purpose.)

So many Americans have told me in their various regions across the country, about local sightings of these boxcars. Others confirmed to me through their local militias or groups about uncovering the presence of detention camps as well. Through such research of many years and thousands of miles and countless man hours, it is not difficult to conclude that AN AMERICAN HOLOCAUST OF THE INNOCENTS IS COMING.

And through much research I understand perfectly now, that no one can actually become the President of the United States, unless approved completely by the shadow government and the forces of the New World Order agenda.

Every President in recent past decades has been a tool of the NWO agenda, to further it's agenda for our nation, even when Americans are not aware of this and of what is going on behind the scenes.

I have worked for 3 decades with Christians persecuted under Communism and Marxism. In Russia and the former Soviet Union, for example, Christians were rounded up and sent to the gulags in prisoner boxcars as well, to be brutally persecuted for their faith, many even tortured and martyred as well under communism/Marxism.

Marxism teaches that "religion is the opiate of the people" and cruelly oppresses Christianity.

Obama is an admitted Marxist, among other things, and trained in this school of teaching for years now.

Can a leopard change it's spots, or the Ethiopian his color, the Bible asks? No, replies the Word of God, they cannot. Even so, a Marxist remains a Marxist and committed to Marxist doctrines and agendas. While indeed President Obama was making a special trip to see the Reverend Billy Graham, the underlying truth remains that Marxism is diametrically opposed to everything Jesus Christ and Christianity represents. So is the NWO.


I noted the following day, a large photo op of Obama sitting across from Billy Graham on the front page of the Asheville Citizen Times. Of course, all of this makes for wonderful public relations, and perhaps even a temporal soothing of American Christian fears of what the future holds under a Marxist and admittedly non-Christian President.

As the Presidential motorcade finally approached the outside of the gates of Montreat, I grasped my heavy railroad spike cross and displayed it high as Obama finally passed by slowly. I did the same as he slowly passed by while leaving Billy Graham's and Montreat, my heart filled with prayers for this man and other members of his White House Cabinet, chosen for their unity in the plans to bring America under their New World Order globalist/communist agenda. And admittedly with sadness as well.

His motorcade slowly passed by. He waved to the crowd. People cheered. And he saw me holding up the cross as well. I was the only one holding up a Cross to President Obama. I believe that, in that instant, the message was clear to those who understand "THE NWO AGENDA" from the inside.

Mr. Obama, Jesus Christ loves and died for you and all your Cabinet as well.

And I know what the many detention camps are already in place for, and the many prisoner boxcars with shackles have been created for. An AMERICAN HOLOCAUST of the innocents is coming, and my fellow Christians and I are someday going into captivity for our uncompromised faith in Jesus Christ and the unchanging Word of God...and many to our death in these boxcars and camps designed to ultimately terminate all NWO resistance.

But our testimony of Jesus Christ and His love for all men remains steadfast. And no, we will never deny our cherished faith in the Lord Jesus Christ to participate in a NWO system that will perish eternally someday, even as the Bible declares, at the hands of a righteous God.

Please come to THE CROSS and to Jesus Christ, Who died for you that YOU might have eternal life, Mr. Obama. It is never too late.

And please, kindly remember the smiling and cheering faces of the Christians who greeted you as you arrived at Montreat, NC, to see Billy Graham. 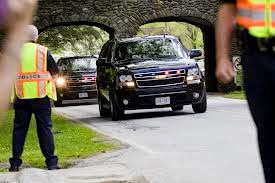 Obama motorcade entering archways
of Montreat, NC, home to Billy Gaham
(I was standing near this site)


Because these very Christians are truly representative
of the very people your NWO will seek to someday persecute and put to death under martial law.

Sharia supporters are now here,
and so are the modern guillotines I have reported on.

Please...don't let it happen.
Not on your watch...


-Pamela Schuffert reporting from NC
Posted by Pamela Rae Schuffert at 7:57 AM