"A Vision of Horror:" Gunman Opens Fire On Jewish School in France 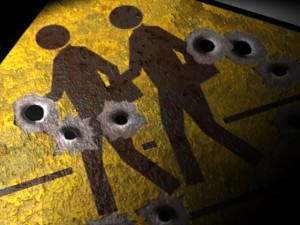 Doesn't this kind of barbaric tragedy break your heart? I can relate to the anguish of the parents when precious little children once again become innocent victims of this world's darkness. I have worked with precious little Jewish children, and love them deeply to this day. But then, ALL children are precious across the globe! Pray for the Jewish families personally affected by this tragedy. Pray for the healing love of God to comfort both children and adults affected by such needless and senseless bloodshed and tragic loss of innocent lives. 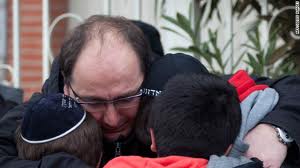 Oh, God, WHEN will the killing ever END in this world? WHEN will the violence and bloodshed EVER stop? Why is it that innocent people and helpless children continually become the victims of man's inhumanity to man throughout the world? The answer to all this is called SIN: the whole world is suffering under it's deadly curse to this very day.

And because of the universality of SIN, God sent His beloved Son into the world. "For God did not send His Son into the world to condemn the world, but that through Him the world MIGHT BE SAVED," declared Jesus to His followers. No person following the teachings and example of the Saviour of the world, could ever commit such a heinous crime (or any other.) Let us increase our intercession with tears and fasting for the merciful hands of Almighty God to restrain such dark actions worldwide.

Jesus Christ remains the LIGHT OF THE WORLD and the only Saviour and hope for mankind. 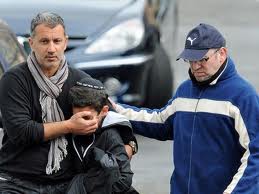 Updated at 9.30 a.m ET: At least four people, including three children and a rabbi, were shot dead by a gunman at a Jewish school in Toulouse, France, on Monday, officials said.

The killings – described as “a vision of horror” by a parent of a child at the school – happened just days after three French soldiers were shot dead in two separate incidents in the area and a French government minister noted “similarities” between the incidents.

Paris prosecutors said in a statement Monday that they were opening anti-terrorism investigations into all three incidents.
The shooter fled the private Ozar Hatorah school -- located in Jolimont district of Toulouse -- on a black scooter, NBC News reported, citing Le Figaro newspaper; other reports described the vehicle as a motorbike. Several other people were injured, two of them seriously, Reuters said. 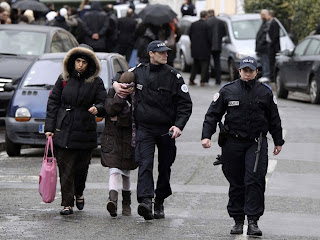 French media said that security was being tightened at all Jewish schools in the country.
Toulouse prosecutor Michel Valet said the gunman killed a 30-year old Hebrew teacher, his two children aged three and six, and another child. A 17-year-old was also shot and in hospital for treatment.

"The attacker was shooting people outside the school, then pursued children into the school, before fleeing on a heavy motorbike," Valet told reporters.

The assailant used a heavy-calibre firearm and another weapon. 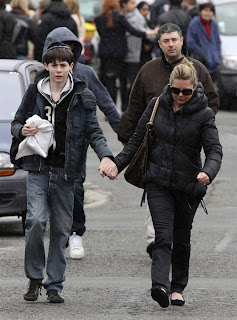 Parents who witnessed the incident -- which happened shortly before 8 a.m. local time (3 a.m. ET), as children were being dropped off at the school -- described the scene.

"I saw two people dead in front of the school, an adult and a child ... Inside, it was a vision of horror, the bodies of two small children,'' a distraught father whose child attends the school told RTL radio, Reuters reported.

PhotoBlog: Images from the scene of the Toulouse school shooting

“I did not find my son, apparently he fled when he saw what happened. How can they attack something as sacred as a school, attack children only sixty centimeters [about two feet] tall?'' he added.

"It was terrible ... It felt like it lasted a long time," Charles Ben Semoun, a parent of a child at the school, told i-tele television, the Bloomberg news service said on its website.

Monday's shootings come days after three soldiers were killed in two separate shootings in the same area by a man who also escaped from the scene by scooter, Reuters reported. French TV station BFM said that the gun used in the attack at the school was of the same caliber as that used in the soldiers' shootings.

French Interior Minister Claude Gueant, who reportedly broke off a visit to another part of France to go to Toulouse, said that "one can't fail to notice the similarities between the attacks on our troops in Toulouse and in (the nearby town of) Montauban and then this horrible attack on children this morning," according to a Sky News report.

French President Nicolas Sarkozy was also on his way to Toulouse Monday, NBC News said, citing local media reports. "This barbaric act cannot win... trust [the authorities] to find this killer. We will find this killer. We must practice calm and caution," he told TV cameras, according to an NBC News translation.

He also said he was "struck by the similarities between the modus operandi of today's drama and those last week even if we have to wait to have more elements from the police to confirm this hypothesis."

The World Jewish Congress President Ronald S. Lauder said in a statement emailed to NBC News that "Jews everywhere in the world are weeping in sorrow and disgust in the face of this despicable terrorist attack."

"Targeting children is a particularly sick and vile act, and nothing can justify it. This attack is an attack on all of us," he added.

"We are horrified by this attack and we trust the French authorities to shed full light on this tragedy and bring the perpetrators of these murders to justice," Israeli foreign ministry spokesman Yigal Palmor told the AFP news agency.

NBC News, The Associated Press and Reuters contributed to this report.
Posted by Pamela Rae Schuffert at 10:10 AM