UPDATE 3/21/2012, 7:54 AM Alaska time-
Just received! YOUTUBE SHOCKER VIDEO presents irrefutable evidence that the Mexico earthquake was PRE-PLANNED weeks in advance and therefore man-made, as in the U S military using PROJECT HAARP frequencies to artificially create earthquakes. Actually, they have been doing this for a while now with HAARP in various locations for their own dark NWO agenda. Go view this now! And THEN begin to connect the dots and realize with horror and anger that the "earth shattering event" that the government is warning insiders about in my article below, IS ARTIFICIALLY GENERATED BY BIG BROTHER...who obviously has no regard for the lives,property  or well-being of the American people. Grrrrrr......

I just received this information by email from a reader. This source believes that the "earth shattering event" my report refers to, could be a coming EARTHQUAKE on the West Coast in Pacific Rim states. And here is a map showing the west coast regions that can be affected. Today, March 20, a 7.4 earthquake occurred near Acapulco on Mexico's west coast. And today in Ecuador,  the Tungurahua volcano was rocked by major explosions. Both are a part of the Pacific rim "ring of fire."Below the map is the information I received today: 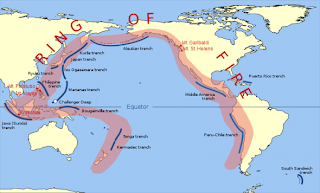 REPORT UPDATE:﻿
Earthquake Warning For Pacific Rim
West Coast States USA
March 22, 2012 @ 4:58:34 UTC
March 21, 2012 @ 11:58:34 pm EDT
The historical and geological records say the Earth and particularly the Pacific Ring of Fire
will experience a 9+ magnitude quake event on March 22, 2012 @ 4:58:34 UTC where Earth
axis is expected to shift 5+ inches. Earth experienced a similar event on February 27, 2010
and March 11, 2011 and we expect the 188-day Cycle Pattern to continue. Everyone living
in a seismic zone should pay careful attention to events transpiring around March 22, 2012
along with people living near the coasts.
END OF UPDATE
*****************
-WARNING FROM SPECIAL FORCES ABOUT MARCH DISASTER-
The source of this information must remain anonymous. It was leaked out only recently. This kind of information lines up with what I have been warning my readers for a long time is coming to America...and NOT BY ACCIDENT BUT BY PLAN!
Remember that none of their NWO plans are written in stone, however...and that PRAYER CHANGES THINGS! Therefore read and PRAY.-Pamela Rae Schuffert
*********

"...I have a Special Forces Friend who lives in Kalispell, Montana. He just called me with major news. He has a Friend who works in the Prison System in Montana. They have been told by Big Gov to be ready for an event to take place sometime between March 13-23. This event will be very earth shattering. They have been told to stock up on 6 Months worth of Food, Diesel, Medical Supplies, Water and other needed supplies! This SF Friend is not a Person who gets His feathers ruffled. He was shocked to say the least..."
***********

One important fact stands out clearly in this leaked memo: the very fact that BIG GOVERNMENT is providing prior warning of this "earth shattering" catastrophe, provides us with damning and undeniable evidence that this "disaster" is yet another INSIDE JOB! (gov/mil "black op" or "false flag" terrorism.)

My burning question now is, is it therefore designed to bring MARTIAL LAW irrevocably? If so, what are they going to pull off? "THE NEXT BIG ONE" (like their previous first "big one" of "9/11") that we have been warned was coming?

More PROJECT HAARP military engineered "disasters" or perhaps a HAARP triggered earthquake? Especially since the memo mentions this would be "...an earth shattering event" ???

Or will it be MISSILES originating from our very own bases, re-directed at INTERNAL TARGETS, as Pentagon and military sources warned me directly would be coming, tied in again with a NWO/martial agenda?

And the list goes on and on of the black ops they have in place for their NWO agenda.

Let's go a step further. This warning originates in MONTANA. In the above leaked memo, Montanans were warned about a calamity coming and to stockpile emergency supplies for up to 6 months. This memo did not specify if this event would be local to the MONTANA region only, or affect all Americans nationwide.

The greatest threat Montanans face as far as physical disasters go, is from the YELLOWSTONE SUPERVOLCANO. Having investigated in Montana since 1997, I know alot about NWO/martial law agendas already in place in that freedom-lovers state.

One of the more bizarre pieces of information came from 3 military sources, one Pentagon, that I met with personally. All three sources warned me of the military planting powerful explosives in various locations throughout Yellowstone National Park. My Pentagon source, Al Cuppet, admitted that this even included a Russian ICBM missile. (And believe me, I could never make up such information if I tried! I was shocked beyond words when I began recieving this information.) Another one of my sources was retired USAF Field McConnell, well known 9/11 truth researcher. The third was a young military man from Bozeman who knew some of Yellowstone's dark secrets that I also knew.

But why? It would be impossible to deliberately trigger the Yellowstone super volcano by such means. BUT you can use these to create underground explosions in order to SIMULATE the beginning rumblings indicating that she is about to BLOW!

This would then form the basis for declaring REGIONAL MARTIAL LAW. The US gov/mil desperately WANTS regional martial law declared there, because of the high concentration of self-declared "NWO PATRIOT RESISTERS" armed with weapons, ammo and emergency supplies, plus determination to fight the NWO  agenda they hate with a passion.

After 15 years of research across America, I have concluded that the  Montana/Wyoming/Idaho region has the highest concentration of dedicated freedom fighters, more willing to sacrifice and more prepared to die to keep America free from NWO encroachment, than that any other region in North America.

You see, if regional martial law and a state of emergency were declared there (Montana/Wyoming/Idaho) they can then start bringing in the UN/NATO (NWO)military forces to control the region, seizing weapons from all suspected NWO resisters, arresting people on various gov/mil lists, and sending them to the FEMA camps via the railway system and the many prisoner boxcars with shackles that are firmly entrenched there.

And then there is the potential for the New Madrid earthquake to occur ( and military HAARP equipment can certainly trigger earthquakes.) This would be "earth-shaking" as well. California has been receiving more earthquake warning tremors as well.

Finally, military sources have warned us to expect nuclear strikes on AMERICAN soil because of our reckless foreign policies in the Middle East. Most recently, Obama signed a Presidential Executive Order declaring WAR WITH IRAN. This opens the deadly doors of PRE-EMPTIVE MILITARY STRIKES (nuclear) ON AMERICAN SOIL by allies of Iran. China relies heavily on Iran for oil, and China has lots of nasty chemical/biological nuclear warhead missiles in her arsenals.

Anything is possible at this point. As I stated previously, PRAY!

And then go and do the practical. Purchase your survival supplies WHILE YOU CAN! Who can really know if something catastrophic will or won't happen during the above stated time period? BUT we do know such things will come to North America eventually. It is always best to be prepared for ALL possible scenarios during the tense hour in which we live.

One important final word :Because of government spying on all communications across America, they become aware immediately when information like this starts spreading like wildfire across the Internet. And because Big Brother does NOT want the truth to be known by the American people about their complicity in such black ops, for damage control they will often change planned dates to future times, long after people have forgotten leaked info such as the above.

In case nothing seemingly ever happens by the 23rd, REMEMBER: POSTPONEMENT of their dark agendas is NEVER CANCELLATION of their agendas! They are simply waiting for a more opportune time, as good little military black ops strategists have learned to do.

If nothing seemingly happens during the projected time frame above, use your "extended grace period" to get PREPARED for the inevitable day when it finally all comes down.