THANK YOU FOR YOUR PRAYERS! LISA and her two children are SAFE after surviving the storm that came to the Alaska coast and to their town of KOTZEBUE. I just spoke to her last night, and they are fine...thanks to GOD and YOUR PRAYERS. 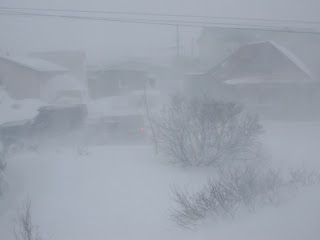 Also thank you for praying as well for the wonderful Inupiat Eskimo people of KOTZEBUE, also endangered by that terrible storm.  They are all safe as well, thank GOD! However, other villages may not be as fortunate: continue to pray for endangered Inupiat villages along the coast, such as Kivalina.-

A trio get a closer look at the large waves cresting over the seawall just south of Nome’s Front Street in Nome, Alaska, Wednesday., Nov. 9, 2011. One of the strongest storms to hit western Alaska in nearly 40 years battered coastal communities Wednesday with snow and hurricane-force winds, knocking out power, ripping up roofs and forcing some residents to board up their windows and seek higher ground. As the storm churned the Bering Sea, residents and emergency responders braced for a possible surge of sea water into already soaked villages along the coast. (AP Photo/Tyler Rhodes)

Automatically generated based on the text of this story.

By DAN JOLING, The Associated Press 12:51 PM Thursday, November 10, 2011
ANCHORAGE, Alaska — A storm of "epic proportions" caused additional flooding overnight and continues to threaten communities along Alaska's western coast.
In Nome, the tide crested 10 feet above normal late Wednesday, causing flooding along the town's main street, which runs along the beach and features gift shops and bars.
Julie Malingowski, a National Weather Service meteorologist in Fairbanks, said early Thursday that strong winds ripped roofs from some buildings in Nome. She says there was a report that one building lost its front wall.
Along the Chukchi Sea coastline, tides were 3 to 5 feet above normal, causing flooding in the barrier island village of Shishmaref.
Damage from heavy storm surf also was being reported in the villages of Kivalina and Point Hope.
Malingowski says winds have eased considerably, but the threat from the storm surge will remain until sea levels begin to fall later in the day.
___
November 10, 2011 05:46 PM EST
**********************************************
ROOFS COME OFF IN NOME ALASKA-

“We do have some reports of buildings losing roofs in the Nome area,” said meteorologist Scott Berg at the National Weather Service in Fairbanks. “Also water at the base of buildings in Nome.”

Nome Communications officer Zane Brown says the height of snow and hurricane-force winds hit at about 2 a.m. He says the city continues to prepare for a possible Bering Sea surge at high tide later in the morning, but so far damage is minimal.Brown says a voluntary evacuation moved residents from beachfront businesses and homes to shelters at a community center and a church.

But he says it’s too early for a complete picture of damage.
The last time forecasters saw something similar was in November 1974, when Nome also took the brunt of the storm. That sea surge measured more than 13 feet (4 meters), pushing beach driftwood above the level of the previous storm of its type in 1913.

Officials are concerned for Alaska Natives in the 18 villages in the region.
The village of Point Hope, which sits on the tip of a peninsula with the Arctic Ocean on one side and the Bering Sea on the other, is seven to eight feet above sea level, said Mayor Steve Oomittuk.

The Inupiat Eskimo village of about 700 people has no sea wall and no evacuation road. If evacuation becomes necessary, everyone will go to the school because it sits on higher ground and is big enough to accommodate everyone, he said.