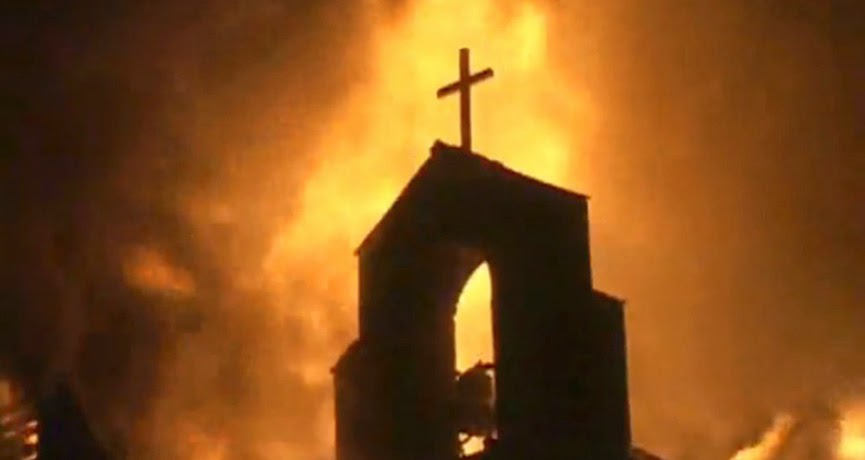 The Bible exhorts Christians to remember other Christians suffering for their faith as if suffering with them.

As persecution of Christians increases throughout the world, this exhortation is something we as fellow Christians must all remember: the mercy we show to others suffering TODAY, is the measure of  mercy we shall someday reap when our hour of persecution comes.

Jesus tells us, "Blessed are the merciful, for they shall obtain mercy." I began to interceded for these besieged fellow Christians as soon as this new began to be publicized.

I admit that I have been struggling to control my emotions (and my nausea) lately while reading the reports of the extensive carnage and destruction being committed in Iraq by the jihadist militants commonly called ISIS or ISIL.

The level of cruelty and barbarity these jihadists exhibit becomes very disturbing as one views graphic photos of their mass executions and murders of innocent civilians, even children and elderly. Thousands of Christians have fled the embattled city of Mosul as ISIS "Takfiris" descended upon it and it's inhabitants with a ruthless fury. 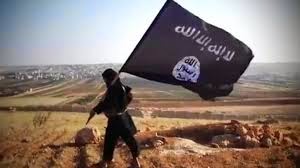 Islamic jihadists of ISIS/ISIL have been reportedly raising their Islamic flags over the churches they have seized, and desecrated and destroyed the inside of such buildings, or have bombed and burned them down completely. 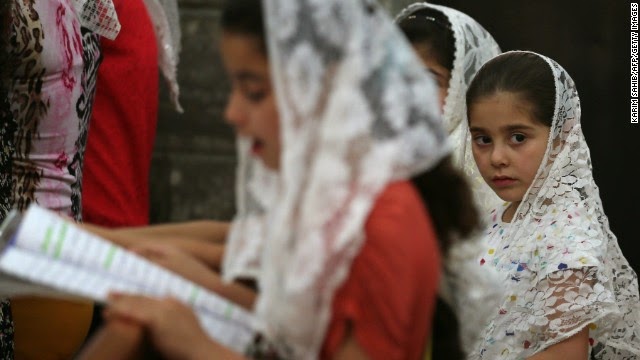 Thousands of inhabitants of Musul fled the brutal troops when they invaded Mosul on June 5th, 2014. This includes 3,000 Christians as well. Here is an eye-witness account from Chaldean Archbishop Nona of Mosul: 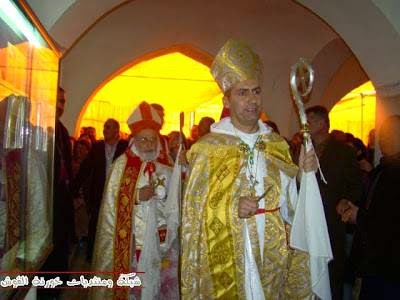 Archbishop Nona reported on the capture of Mosul:

“We have never experienced anything like it before. A major city like Mosul has fallen victim to chaos.” The fighting, he said, began on Thursday, June 5; at first, however, it was limited to several districts in the western part of the city.

“The army began to bombard the areas that were affected, but then the armed forces and the police suddenly left Mosul during the night between Monday and Tuesday, leaving the city at the mercy of the aggressors.”

More than half of the inhabitants and the entire Christian community immediately fled to the nearby Nineveh Plain. “At around 5:00 on Tuesday morning we took in the families of refugees and tried to lodge them in schools, catechism classrooms and abandoned houses,” Nona reported. He is presently staying in the village of Telkef to the north of Mosul.

Archbishop Nona was the successor of of the martyred Paulos Faraj Raho, killed by Islamic militants in 2008. 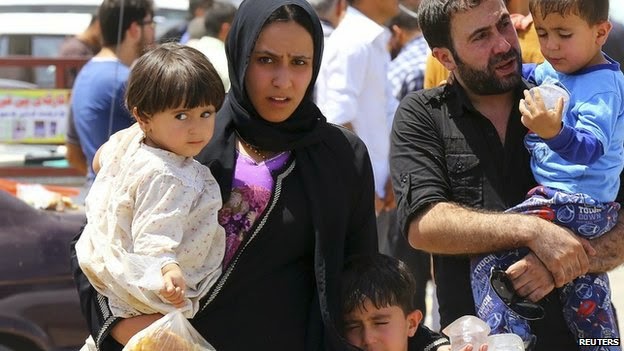 ISIS has previously carried brutal attacks on Christians and their churches in Syria as well. Below is one church attacked in Syria by these brutal jihadists. 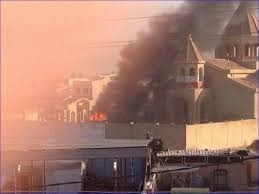 More recently, it is being reported that many people who originally fled are actually returning to Mosul, willing to live under Islamic extremists than remain refugees without a home any longer.

However, that cannot include the majority of Mosul's Christian population, who would undoubtedly face severe persecution and even death at the hands of these barbaric persecutors of Christianity in the Middle East. Christians have already been murdered by ISIS militants in other regions of Syria and Iraq and elsewhere. 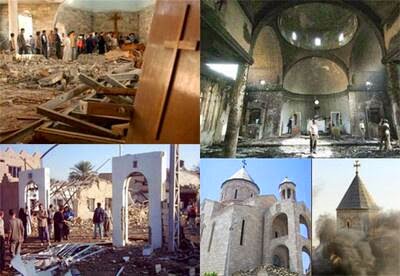 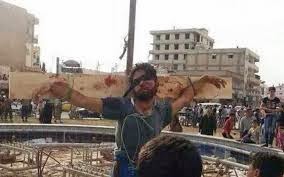 Young Christian crucified by Muslim extremists in Raqqa, Syria
Reports previously coming out of Syria have included accounts of Christians being beheaded and crucified by Islamic jihadists of ISIS. From THE DAILY MAIL in the UK:
ISIS is pushing to expand its territory, which currently straddles the border between Syria and Iraq, and includes land extremely close to the Turkish border.
ISIS' center of power is Raqqa, a city in northern Syria, which is being run under the regime's oppressive and violent code. Raqqa was heavily contested throughout the Syrian conflict, and was held by several rebel groups until Isis threw out all other contenders in 2013.

Recently ISIS leaders imposed punitive rules on the city's Christian population, demanding that they pay a levy of gold for 'protection' or else face being killed on the streets for their faith.

One shocking article from another website reveals the following graphic horrors: 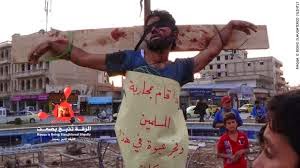 - For example, in Maalouli, Syria, Islamic militants crucified two young men because they refused to [deny their faith in Jesus] and chose martyrdom. They told them: "So you want to die like the Teacher in whom you trust? Please choose: either to renounce (your faith) or you will be crucified! "

One of them was crucified in front of his father, who was subsequently killed.In the Abri, an industrial zone on the outskirts of Damascus,  they started killing men, women, children. After the massacre, they played football using  their heads. And when it came to pregnant women, their children were pulled from the womb and they hung them on trees by their umbilical cords. (Translated from the original website below:) 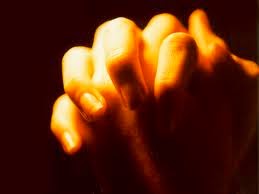 "Remember those in bonds as if bound with them.."

Many Christians in North America and throughout the rest of the world are deeply disturbed by this series of attacks against Christians in the Middle East. The question often arises, "So what can I do to help these Christian victims of persecution?"

INTERCESSORY PRAYER is something every Christian can participate in, and should be doing continually on behalf of the persecuted Church of Jesus Christ worldwide. However, we must always remember that "FAITH WITHOUT WORKS IS DEAD." PRAYER is our way of asking God to do something. But often in response, God is asking US to do something as well! Always remember: God works through His people!

Ask yourself: if YOU were suffering among these persecuted Christians, what would you want other Christians to do for YOU??? 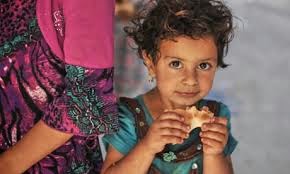 There are Christian relief groups that are attempting to provide emergency aid and assistance to these displaced and persecuted Christian refugees in both Iraq and Syria.

You can contribute financially to provide food and tents and other essential aid to these Christian refugees through these relief groups.

CHRISTIAN AID has a wonderful program to help those who are suffering in Iraq.

Below is an excellent article outlining endangered Christians in Iraq:
http://www.foxnews.com/opinion/2014/06/20/religious-cleansing-iraq-christians/

Performing further research on the Internet through various search engines will also prove helpful in finding various Christian relief agencies who are involved in outreach to these endangered Christians in Iraq and Syria at this time.

May God use each one of us, His Christian remnant, to make a difference in the final outcome of the Islamic battle being waged against Christianity in the 21st century.

And remember: Islamic persecution is happening not only in Iraq and Syria, but also throughout various countries in the world today. Christians are being martyred by Islamic extremists even as you read this. Let us, as members of one another, purpose to ever be ONE with the persecuted Church worldwide. 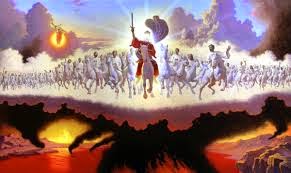 "These shall make war with the Lamb, and the Lamb shall overcome them. For He is Lord of lords and King of Kings, and they who are with Him are called, chosen and faithful."

Of course, there is always much more to a story than the controlled mainstream news media will tell you initially. The truth is, America, NATO and her allies in the Middle East (like Saudi Arabia)play a hidden major role in this ISIS operation, and once again it is all about power and control and the oil in that region.

Deliberate destabilization of various countries and governments in order to jockey into power the West's "chosen" puppet rulers to then do their bidding is always a part of US foreign policy around the world.

And according to them, innocents victims of their agendas of greed and war be damned! They simply do not care how many injured and dead victims they leave in their cruel wake.

America had to have more military arms and equipment to arm their rebel mercenaries in Syria, and so amazingly these ISIS forces have somehow managed to get their hands on both military arms and vehicles in Iraq, and now they are being transported to SYRIA to aid the rebel forces fighting to topple Assad. How convenient!

There are many excellent articles on various website exposing what is really happening in Syria and Iran and why, and exactly WHO is really behind all this.

Several articles I read outlined that the destruction of the Christians from the Middle East has always been part of the larger agenda for that region. Many Israeli Jews and Muslims agree on this completely. Have you noticed how silent the mainstream news media is in general about the violent and ruthless persecution and murder of Christians in this region by the Islamic jihadists?